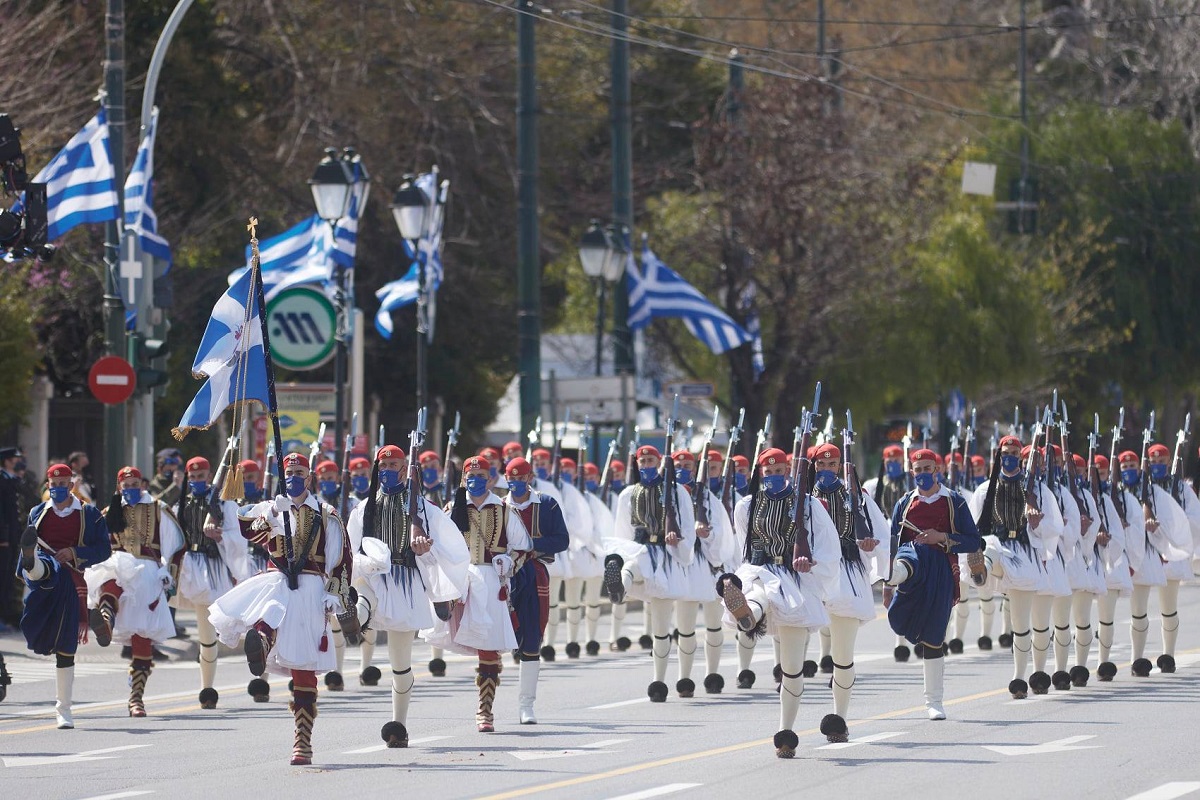 Greece’s Independence Day on March 25, was celebrated with a shortened parade in the presence of world leaders. Photo source: @Kyriakos Mitsotakis

Greece marked Independence Day on March 25 with a shortened parade and no crowds due to tough Covid-19 measures but attended by world leaders, who were in Athens for this year’s bicentennial events celebrating freedom from 400 years of Ottoman rule.

Among the leaders and dignitaries in Athens were heir to the British throne Prince Charles of Wales, and Camilla, Duchess of Cornwall, Russian Prime Minister Mikhail Mishustin, French Defense Minister Florence Parly (replacing French President Emmanuel Macron who cancelled last minute due Covid-19), and Cyprus President Nicos Anastasiades, who were welcomed for the inauguration of the renovated National Gallery. A state dinner was hosted by President Katerina Sakellaropoulou later in the evening. 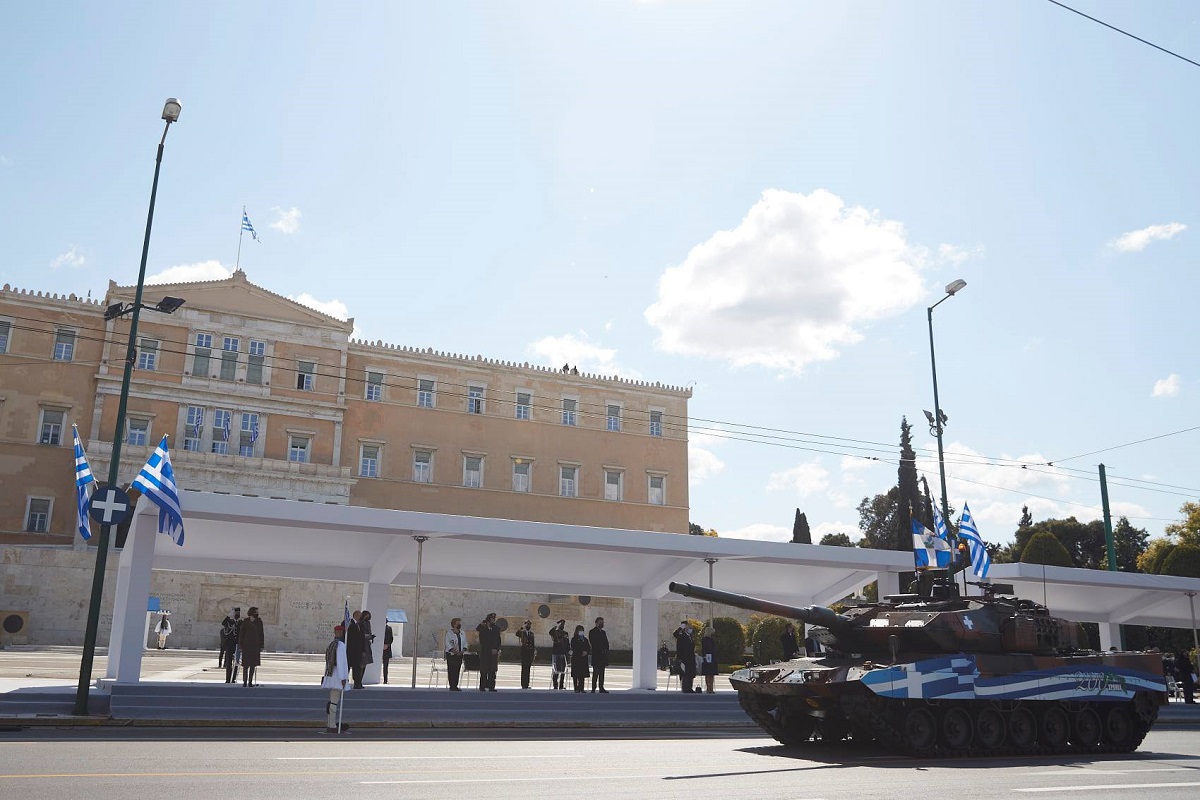 Athens was decorated for the occasion, while Greece’s national carrier AEGEAN ran celebratory flight A3 1821 over the Peloponnese forming the number 200 in the sky.

Also in tune with the Greek national holiday was Google, which “decorated” its search engine with a Greek flag doodle and the number 200 on occasion of Greece bicentennial celebrations.

Greece’s bicentenary was also celebrated by Greek diaspora communities worldwide. Landmarks and iconic buildings in the US, Canada, South Africa, Europe, and Australia, including Niagara Falls, the Eiffel Tower, San Francisco City Hall, Boston Celtics Stadium, Toronto’s CN Tower, and the Sydney Opera House, among others were “dressed” in blue and white: the colors of the Greek flag. 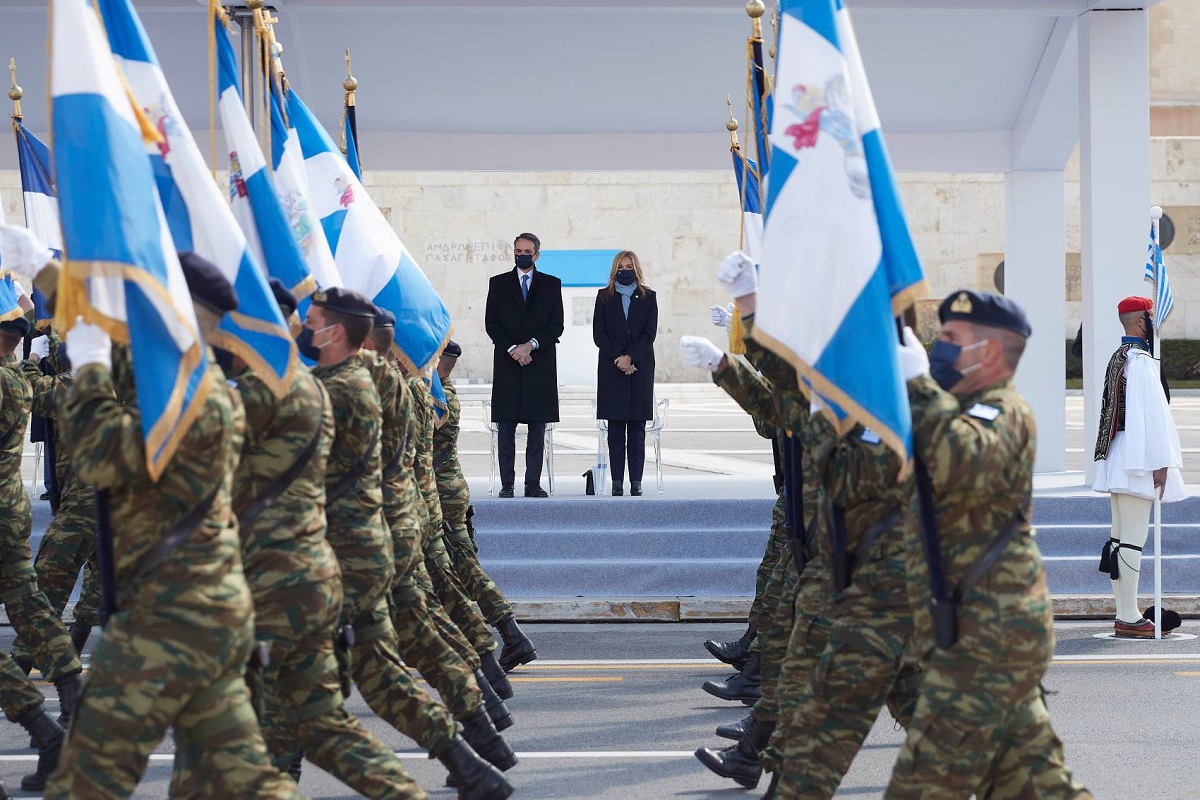 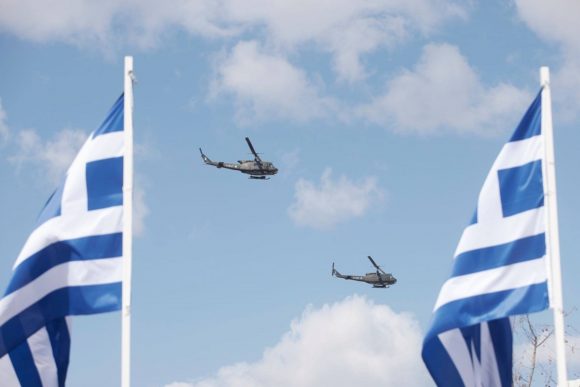 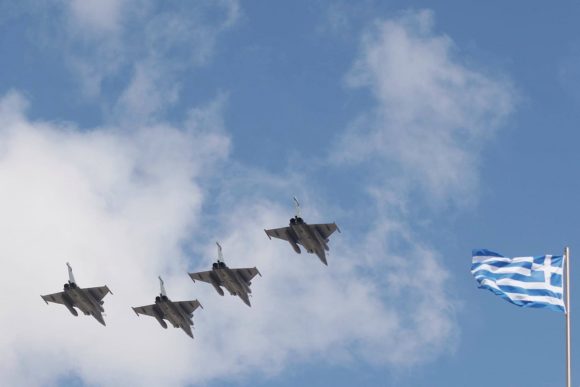 “March 25 is unique. But also special, as it finds us waging the final battle against the pandemic. The difficulties are many, but victory is now visible. Besides, our national vaccination campaign is named after the Greek word for freedom, “Eleftheria”,” said Greek Prime Minister Kyriakos Mitsotakis in his message to the nation. 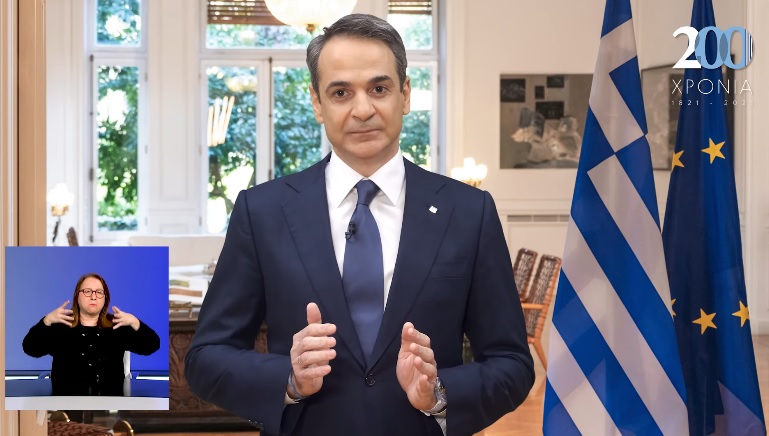 Mitsotakis said that Greece was today “drawing inspiration from its ancestors while firmly holding the torch of progress, which is passed from one generation to the next… Turning yesterday’s experience into fuel for the path towards the future”.

In a video-taped message of solidarity and renewed ties, US President Joe Biden spoke of “shared ties, common values”, and an “enduring friendship” between the two countries, adding that “our democracy was inspired by the example of the Athenian democracy”.

“It’s our shared commitment to liberty, human rights and the rule of law that empowers us to write our own futures whether 200 years ago or today,” he said. 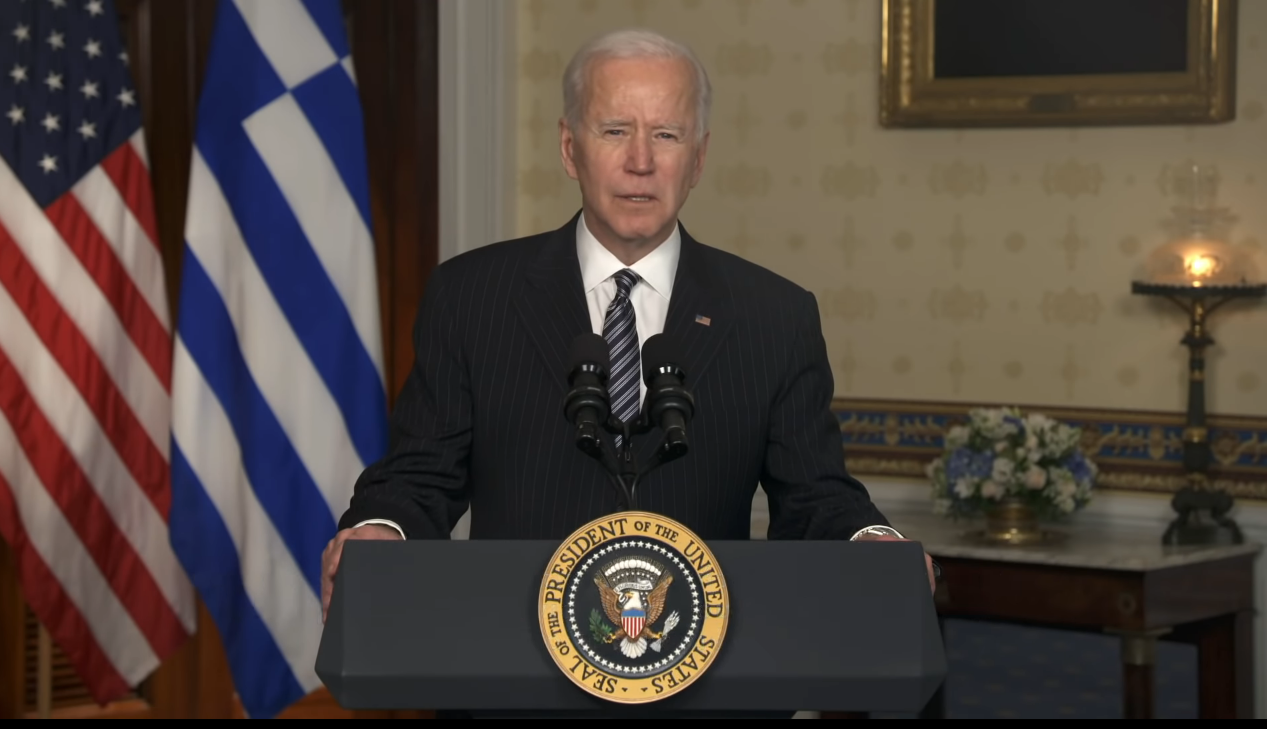 The American president went on to add that ties between the two nations would now be closer than ever, adding that “we’re committed to taking this relationship to new heights”.

Biden also spoke with Mitsotakis over the telephone on Thursday following the EU Summit.

Stressing the importance of the 1821 Greek struggle for independence, French President Macron said it should serve as inspiration for France and Europe. In an interview to public broadcaster, Macron said Greece was “at the forefront of European freedom”, a struggle for culture.

On his part, Prince Charles praised the resilience of the Greek people during the “desperately difficult years” of the economic crisis, adding that the world should take “inspiration from the courage, determination and the ambition of 1821”. 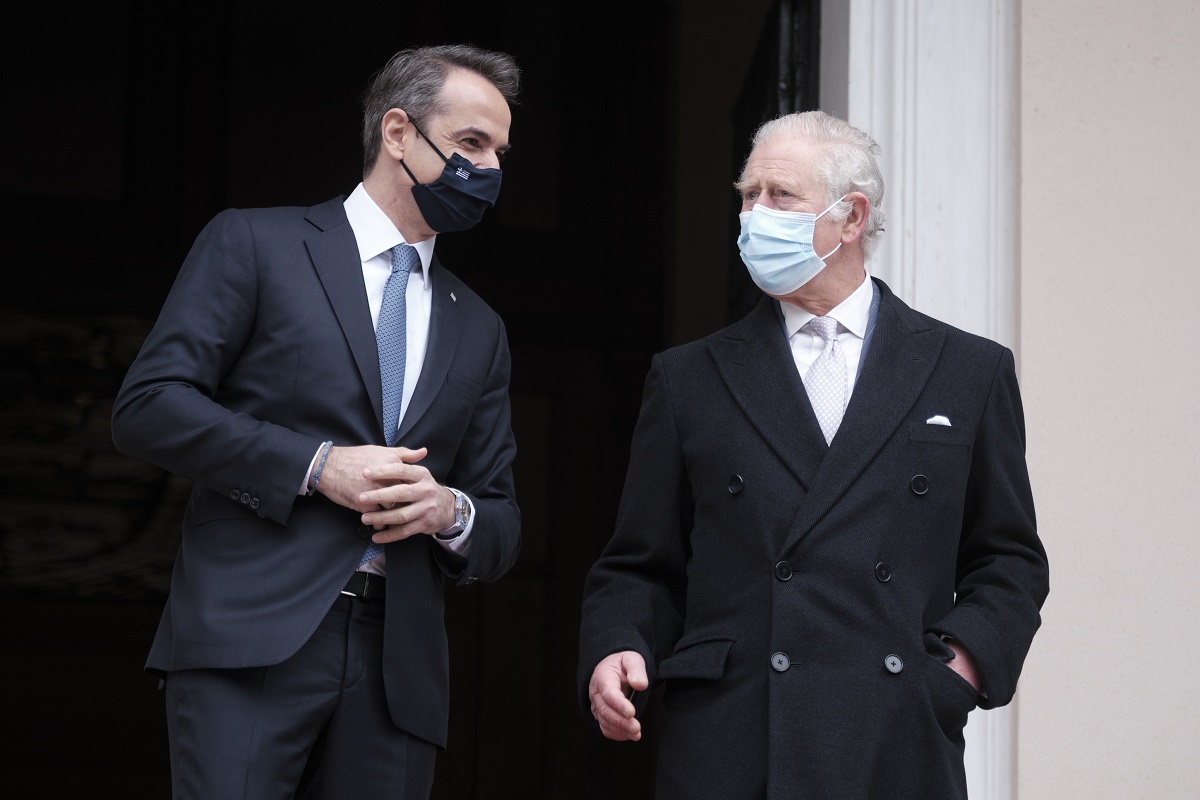 “After what has been a difficult year, I am sure that the bicentenary celebrations will bring the promise of better times, whilst reinforcing the warmth of relations between our two governments and peoples,” said the Queen of England, Elizabeth II in a message to Greece.

This year marks the 200th anniversary of the Greek Revolution and War of Independence in 1821.

Covid-19 Health Protocols for Greek Tourism in the Pipeline