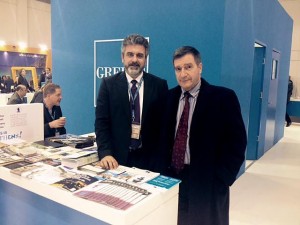 Whether it’s traditional markets like Germany or new markets like Central and Eastern Europe, Athens is gaining ground as a leading tourism destination thanks to the joint efforts of the Athens Convention & Visitors Bureau (ACVB), the municipal Development and Destination Management Agency (EATA) and the Athens-Attica & Argosaronic Hotel Association.

During their latest promotion of the Greek capital at the ITB 2015 held in Berlin on March 4-8, municipal authorities participated in a series of B2B meetings, distributed of travel material and promoted the 3rd Travel Trade Athens, set to take place on April 26-27. For the first time, Athens also featured at the ITB’s Pink Pavillion as an ideal Gay & Lesbian tourism choice.

In the meantime, German demand to visit Athens has increased ahead of the summer season with points of interest including the Saronic isles, Greek gastronomy and the historic city sites. The introduction of even more direct flights to Athens, has contributed greatly. 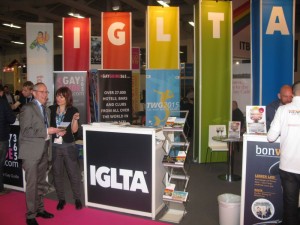 ACVB’s Orhideea Rosu talks about Athens with IGLTA’s Clark Massad at the IGLTA stand located in the Pink Pavillion in ITB. Photo © GTP

At the same time, travellers from Poland, Hungary, Serbia and Slovakia are also keen on visiting the Greek capital, with local tour operators seeking collaborations with Greek sector professionals.

As part of the municipality’s promotional plan to give Athens a competitive edge was this year’s decision to sponsor the LGBT Media Networking event during the ITB 2015 as well as to submit a bid to host the International Gay and Lesbian Travel Association’s (IGLTA) world congress in 2018, attracting LGBT professionals and market experts from over 25 countries.

In the meantime, Athens will host the prestigious contemporary art Documenta 14 show titled “Learning from Athens” in June 2017. The art event has been held in the German city of Kassel since 1955.