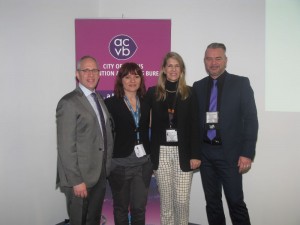 Athens is preparing to make a bid to be the host destination for the International Gay and Lesbian Travel Association (IGLTA) Global Convention in 2018.

The announcement was made on Wednesday during the Gay & Lesbian Media Networking Brunch at ITB Berlin, which was sponsored by the Athens Convention & Visitors Bureau (ACVB). This was the Greek capital’s first appearance in approaching the gay travel market at ITB.

However, according to the Travel Trade Sales & Marketing Manager of ACVB, Orhideea Rosu, the Mayor of Athens Giorgos Kaminis is keen on making the city a more gay-friendly destination. Ms. Rosu is also the IGLTA Ambassador for Greece since 2010.

IGLTA: Athens is a welcoming destination for gay travellers 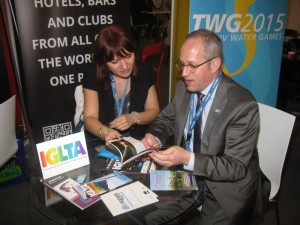 ACVB’s Orhideea Rosu informing IGLTA’s Clark Massad on Athens at the IGLTA stand at the Pink Pavillion in ITB Berlin.

The IGLTA Global Convention is a premier educational and networking event that attracts delegates from more than 25 countries. Delegates include travel agents, tour operators, hoteliers, airlines and rental car companies that market their products and services to gay and lesbian travellers.

“There is such a wide range of offers that Athens has that appeal to the gay and lesbian traveller,” IGLTA Vice President Clark Massad told GTP.

According to Mr. Massad, Athens has done alot of work to position itself as a gay-friendly destination. “It’s just a matter of packaging and putting it all together so it becomes appealing and attractive to gay and lesbian travellers.”

Among the elements needed for a destination to host the IGLTA Global Convention is for the city to be home to top world-class hotels, which is the case for Athens. “What’s important to our convention is that we would like to be able to offer a range of hotels to our convention delegates,” he said.

Among the benefits for a city that hosts the IGLTA Global Convention is the opportunity to showcase itself as a destination to gay and lesbian travel professionals and journalists.

“From a visibility standpoint, you get a lot of press and coverage as a host city and also it is a very important way in the long term for the city to really illustrate its real and concrete commitment and support to the gay and lesbian market,” Mr. Massad added.

The ACVB will make the bid to host the 2018 IGLTA Global Convention following the completion of the association’s convention in Los Angeles (April 8-11).