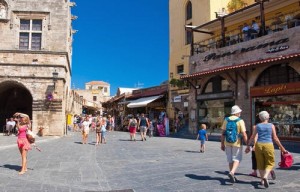 The January 25 election result in Greece, bringing the leftist Syriza party to power with a majority vote has created concern in the UK press with a series of articles wondering whether British travellers — some 2 million visit Greece annually — should think twice before packing their bags.

Stories running in the Independent, the Daily Mail and the Telegraph, among others, are concerned about the initial months of political instability but conclude that British tourists will remain unaffected by the recent change in government.

The Telegraph speaks about what UK tourists have to gain from Syriza’s election victory, which is namely “cheaper holidays, fewer strikes and improved ferry services”, citing the favorable euro-pound exchange rate.

Association of British Travel Agents (ABTA) chairman and managing director of Sunvil Holidays Noel Josephides backed this up by saying that trips to Greece, France, Spain and Italy “can only get cheaper”. He also added that protests and unrest are highly unlikely.

“Tour operators are tied in when it comes to both currency and fuel, so booking late and independently could be cheaper,” Josephides told the Telegraph.

The 2015 ABTA convention, expected to attract over 600 British travel agents/ABTA members and representatives of Google, Yahoo, Tripadvisor and travel writers of leading British publications, is scheduled to take place in Greece, in Messinia, at the famed luxury resort Costa Navarino from 12-14 October.

At the same time, the Independent goes as far as to refer to a “theoretical possibility that Greece may crash out of the euro, and reinstate the drachma”, adding however that the effect on holidaymakers will be marginal.

Cited by the Daily Mail, Thomas Cook said the change in government has no impact on their operations in Greece. “As a tour operator, we are there to support our customers, who can be confident they can book their holidays to Greece with us without any concern.”

In the meantime, recent data released by the Hellenic Statistical Authority (ELSTAT) revealed that Greece reported a 22.2 percent increase in the first nine months of 2014.

The Greek Tourism Confederation (SETE) is confident that tourists will continue to trust Greece and will not be put off visiting.

“With the improvement in the quality of our products and services and the competitiveness of our prices, fueled by the devaluation of the euro and the fall in oil prices, we are confident that we can reach or even exceed our targets for this year.”