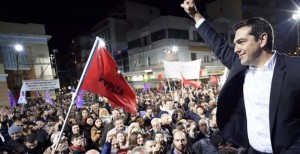 For the first time in almost 70 years, a leftist party takes over the reigns of the Greek government, with Syriza winning national elections on Sunday, securing 36.34 percent of the total votes, clinching 149 seats in parliament, two short of absolute majority.

A total of seven parties have been elected with seats in the 300-seat Greek parliament, making this the first ever multi-party parliament in Greek history.

Europe views Syriza’s victory with great unease as the radical leftist party has said it will no longer tolerate strict austerity measures and Greek policy interventions that have devastated the Greeks in the last five years with party leader Alexis Tsipras promising the Greeks in his winning speech late Sunday night, that his party will fight to bring back the lost dignity of the Greek people.

The 40-year-old Tsipras, who is expected to be sworn in later today, was set to meet this morning with Panos Kammenos, leader of independent party ANEL (Independent Greeks), which enters parliament with a 4.75 percent of the vote as well as with smaller party leaders of Potami and the communist KKE, in efforts to garner support to form a government this week.

Should ANEL agree, the new coalition government will have a 162-seat hold in parliament. According to newspaper reports, a member of ANEL is most likely to be handed the shipping ministry, economist Yanis Varoufakis is tipped as being Syriza’s new finance minister and Zoi Konstantopoulou as its justice minister.

The conservative New Democracy party came second with 27.81 percent (76 seats) and the ultra-right wing Golden Dawn, with most of its members in jail, finished third with 6.28 percent (17 seats).

Dollar-Euro Exchange Rate Key to More Tourists from US