The Greek tourism ministry will focus for the 2019-2020 season on reaching out to last-minute bookers, with additional efforts aimed at speeding up visa procedures, said Greek Tourism Minister Haris Theoharis this week.

Speaking on public broadcaster ERT, Theoharis said the ministry was taking “corrective actions” for the year ahead, noting that revenue is not expected to show signs of improvement. The minister cited increased supply and many investments, which led to a reduction in prices in 2019, as the cause. 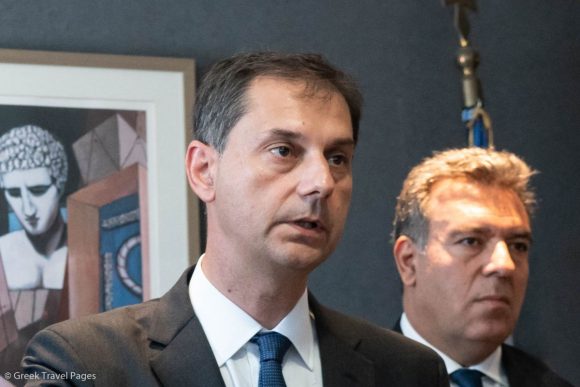 Indicatively, according to Bank of Greece data, revenue from tourism is forecast at remaining flat for 2019, compared to 2018, which was a much better year, according to tourism professionals. At the same time, according to Hellenic Chamber of Hotels data, a 10 percent drop in the number of overnight stays countrywide has been recorded, with air traffic also slowing down.

To address this, the minister said the upgraded Greek National Tourism Organization (GNTO) would in the upcoming period launch a series of campaigns targeted at last-minute bookers.

Additionally, Theoharis said, in collaboration with travel agents, the ministry is looking into ways to speed up visa procedures for a number of countries.

In terms of investments, Theoharis said following the finalization of the Chios marina deal last week, the Alimos marina is up next, as are plans for a number of small ports across Greece, adding that the government was also preparing a new legal framework that will speed up licensing procedures for a delayed seaplane network.

Minister Theoharis told ERT television, that he expects revenue to increase after 2020, once corrective actions have been taken and the government’s strategic plan can be implemented.