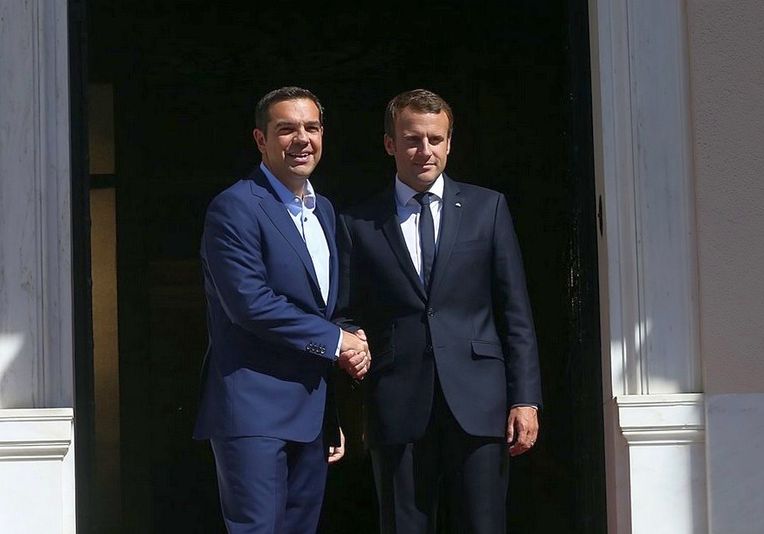 President Emmanuel Macron arrived in Athens on Thursday and expressed France’s support to Greece’s effort for recovery and prosperity while speaking to Greek Prime Minister Alexis Tsipras at the Maximos Mansion. This is Macron’s first visit to Greece after his election in June.

The Greek and French flags outside of the Hellenic Parliament on Thursday.

“Greece is returning to recovery, growth and investment,” President Macron said during a news conference alongside Greek Prime Minister Alexis Tsipras, and urged the country to speed up reforms.

Makron said that France backed Greece’s effort and referred to Greece’s return to markets as the first positive step.

On his part, Tsipras referred to the course of the Greek economy, which he said was “positive, and underlined the country’s successful tourism performance. “We are now much more optimistic,” he said, adding that Greece’s goal is to successfully complete the third economic adjustment program in August 2018.

“We are in a position to create a climate of confidence for investors,” the Prime Minister continued, noting that “with a plan and hard work”, Greece can leave behind the years of the crisis.

“We agreed with Mr Makron to work closely on investment,” Tsipras said.

A number of French business leaders and CEO’s are accompanying President Macron on his visit to Athens.

“They will help Greece make a comeback. We want to support the growth that is coming back to Greece,” he said.

According to Macron, France will sign agreements with Greece for the Development Bank, the Thessaloniki Port Authority,innovation and energy, among others.

On Friday morning, Greek entrepreneurs that represent almost the entire range of entrepreneurship in Greece will have the opportunity to discuss possible business opportunities with the French CEOs during a round table meeting chaired by Makron and Tsipras at the Stavros Niarchos Foundation Cultural Center in Kallithea, Athens.

During the news conference, the French president urged the International Monetary Fund (IMF) not to raise new demands in regards to Greece. “”I believe that the IMF’s position on this negotiation should be done in good faith and without new terms and conditions,” he said.

On his part, PM Tsipras said that the contribution of the IMF as a whole to European programs should be evaluated on the basis of the Greek experience. “The impact of this participation was not always positive,” he said.