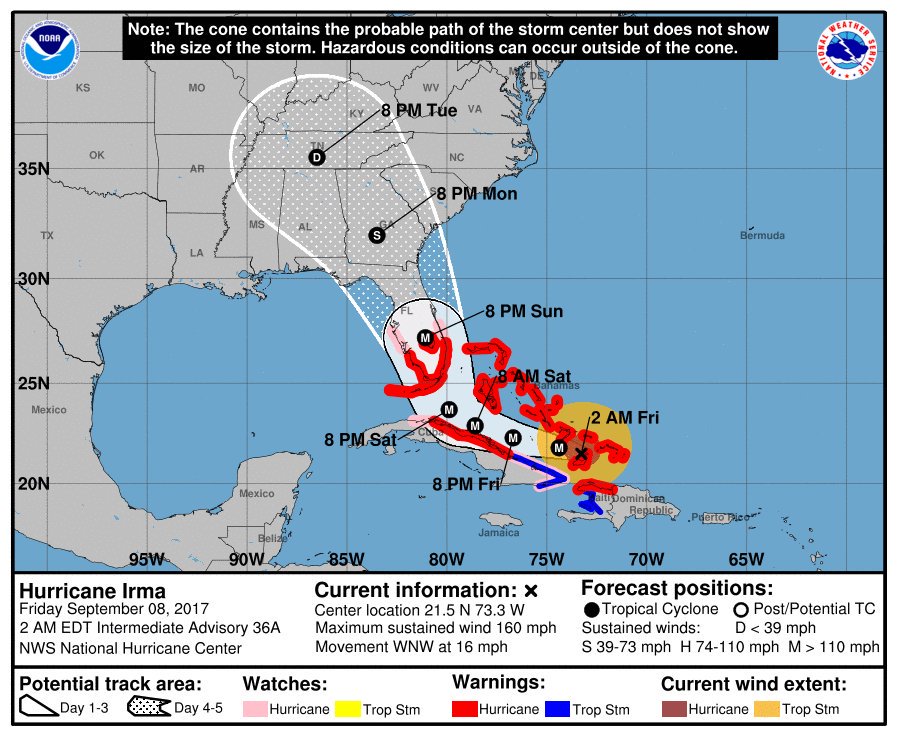 As Hurricane Irma continues to draw closer to Florida, air travel is expected to be affected in the United States following the first official hurricane warnings issued for the city by the National Hurricane Center late Thursday. Mandatory evacuation orders have already been issued for Florida Keys and swaths of southern and coastal Florida.

Hurricane Irma, dubbed the most powerful Atlantic storm in a decade, has been a Category 5 storm for more than two days with sustained winds of up to 185mph.

Hurricane Irma has killed at least 13 people — eight on St. Martin, three in Puerto Rico, one in Barbuda and one in Anguilla –and left thousands homeless. It continues making its way through the Caribbean.

US Weather experts said that Hurricane Irma will pose a dangerous threat to Florida, Georgia and the Carolinas starting this weekend.

“Key uncertainties remain in the forecast for Irma’s eventual impacts along its future path,” a report by weather.com said.

According to US reports, while the exact path of Hurricane Irma is still unknown, carriers have already cancelled flights at major South Florida airports.

Airlines including United Airlines, Delta Air Lines and American Airlines have added extra flights to help passengers leave Florida but will wind down operations at South Florida airports as early as Friday afternoon.

“By late Saturday, Miami, Orlando and Fort Lauderdale – home to the 12th, 13th, 21st largest airports in the U.S., respectively – will be largely dormant as the extreme weather rolls in. But the prospect of a direct hit from Irma represents another blow to U.S. air travel in one of the busiest air corridors on the planet for business and leisure travel,” a news report by CNN said.

According to CNN, among Miami, Fort Lauderdale and Orlando, the three airports handled more than 115 million passengers in 2016.

Travelers are advised to contact their airlines or travel agents for updates on flights.

According to data modelling firm Enki Research, the bill for loss and damage from the hurricane could hit $120 billion in the United States and the Caribbean.