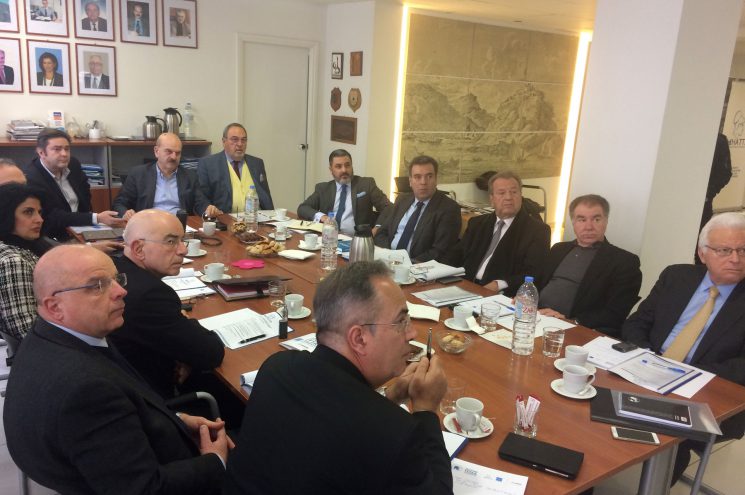 The challenges facing the tourism sector were at the center of talks between the Federation of Hellenic Associations of Tourist & Travel Agencies (FedHATTA) and opposition party New Democracy’s (ND) head of tourism, Dodecanese MP Manos Konsolas.

Held at FedHATTA headquarters on Tuesday, the meeting is one of a series with tourism sector players with the aim of gaining insight into the problems and collecting proposals for the solution of issues facing the industry.

Subjects discussed included illegal home rentals operating as tourism accommodation as well as the proposal to set up a specialized tourism chamber which will evolve from the existing Hellenic Chamber of Hotels. Other areas covered included the necessity to harmonize national legislation with the revised EU directive on consumer protection for organized holiday deals as well as the need to provide tour guides with further training via seminars.

FedHATTA reiterated its priorities, which include reaching out to new markets, extending the tourism season to 12 months via its ongoing ”Dodeka” program, promoting the new professional exhibits scheme “Agent Abroad”, and fostering stronger bilateral ties for the mutual promotion of tourism between countries.

The federation urges cooperation and commitment of all stakeholders irrelevant of political interests towards the single goal of bolstering the tourism industry.

“For New Democracy the priority is to eliminate illegal activities in the tourism sector and to create an institutional framework that will protect against arbitrary operations. In this context, there should be immediate harmonization of national legislation with the revised EU directive,’’ Konsolas said.

FedHATTA and Konsolas agreed to hold smaller meetings on individual issues affecting the sector and which involve other ministries.