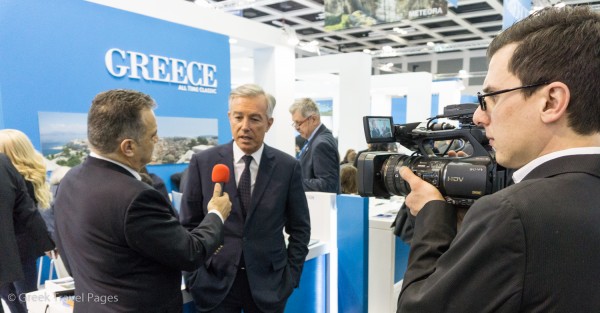 Greek tourism could see an increase of some 1.5 million more tourists and around 800 million more revenue this year if the refugee crisis is addressed effectively, according to the president of the Greek Tourism Confederation (SETE), Andreas Andreadis.

Speaking on the sidelines of the first day of the ITB Berlin trade show on Wednesday, Mr Andreadis said that international arrivals to Greece this year could reach 25 million (27.5 million including sea cruise passengers), from 23.5 million in 2015 and the total revenue could reach 15 billion euros in 2016, from 14.2 billion in 2015.

SETE’s forecast is based on data received at ITB, the programming of air seats in 2016 and figures from tour operators and online distribution systems such as Amadeus.

In 2015, the number of visitors from German rose by 14.3 percent compared to 2014, to reach 2.8 million, while the overall rise in German visitors to Greece since 2010 has been 38 percent. Last year, German visitors contributed 2.26 billion euros to the Greek economy, according to the Bank of Greece.

However, SETE’s president said that the increase will not be horizontal throughout the country.

“Specific destinations that have been hit by the refugee influx will record a significant decline in arrivals this year”, he said.

SETE’s president added that this year’s tourism season will be a catalyst for the further development of Greek tourism and its contribution to the Greek economy and employment.

He added that the State must follow decisions taken at a European level regarding the efficient management of refugee flows and ensure the smooth functioning of local communities and tourist destinations, particularly the islands of the Eastern Aegean that have been bearing the brunt of the refugee crisis.

According to Mr Andreadis, if the above mentioned factors are not treated promptly and effectively, there is a serious possibility that Greece’s image will be tarnished and this year’s overall results may be below those of 2015.