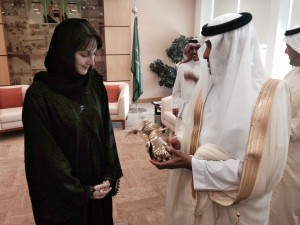 The Saudi Arabian government pledged that it will support Greek tourism during Alternate Tourism Minister Elena Kountoura’s recent visit to Riyadh, as part of the government’s action plan to attract foreign investment and on the occasion for the 1st Greek Tourism Workshop held on April 19.

During her stay in the Saudi Arabian capital, the minister met with Saudi Commission for Tourism and Antiquities (SCTA), Prince Sultan bin Salman, who expressed his satisfaction with the strengthening of cultural ties between the two countries.

The minister added that as of July, Greek carrier Aegean Airlines will launch two weekly direct flights from Riyadh to Athens, which she said will boost tourism to Greece significantly and provide the chance for Saudi travelers to explore the country’s vast potential.

Ms Kountoura also met with Saudi Arabian Transport Minister Abdullah bin Abdulrahman Al-Muqbel, who said that the exchange of expertise in the field of transport is a priority of his government, particularly transport by sea, an area in which Greece excels.