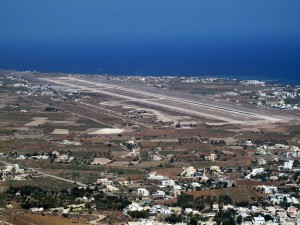 Irish low cost carrier Ryanair said it was against the privatization of Greece’s local airports, proposing instead that the Greek government announce a new bid which will have the increase in passenger traffic as a prerequisite.

During a meeting with Economy Minister Giorgos Stathakis and Alternate Tourism Minister Elena Kountoura this week, Ryanair’s chief commercial officer, David O’Brien, said he was against handing over the control of 14 regional airports in Greece to Frankfurt-based transport company Fraport.

Under the 1.2 billion euro deal arranged by the previous government and set to close in October, the German airport operator will lease and run 14 local airports in leading tourist destinations jointly with Greek energy giant Copelouzos.

O’Brien stressed that a private monopoly would only increase access costs and ultimately have a negative impact on Greek tourism, and added that private parties will only focus on the three-month summer season.

In a press conference on Monday, O’Brian said that Ryanair would continue to strengthen its presence in Greece, and announced “strong bookings” on its six new Athens summer 2015 routes to Bratislava, Brussels, Budapest, Rome, Santorini and Warsaw.

With a total of 12 routes, the airline expects to handle some 2.2 million passengers annually while supporting 2,200 supplementary jobs at Athens International Airport.

In Athens, Ryanair intends to boost its connection with Germany, currently handled by Aegean, Lufthansa and easyJet, with a daily flight from the Greek capital to Berlin, as part of its winter 2015 schedule.

O’Brian revealed that for 2018 the company aims to increase passenger traffic to Greece by 10 million, contributing some 3 billion euros in tourism-related revenue.