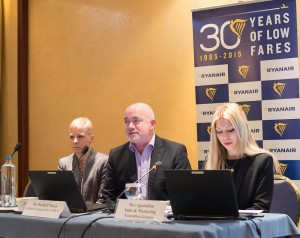 The new connections are part of the airline’s 12-route summer schedule.

Speaking at a press conference in Athens, Ryanair’s chief commercial officer, David O’Brien, said plans also include extra flights to Chania (three daily) and to Thessaloniki (six daily) from the Greek capital as of Summer 2015.

In addition, Ryanair will also launch a new route from Athens to Berlin as part of its winter 2015 schedule. Flights to Berlin will initially run from Athens International Airport (AIA) and are gradually expected to launch from other Greek airports, starting from the second largest city, Thessaloniki.

During the press conference, Mr. O’Brien made reference to Ryanair’s relatively low passenger volume and “downgraded” performance at Athens Airport compared to other European airports, which he said was due to the high charges of AIA.

He said Athens Airport has tremendous potential and that if airport taxes and fees were reduced, Ryanair could increase passenger traffic to the Greek capital by 10 million a year, which would translate to some three billion euros in tourism revenue for Greece.

However, he implied that the heads of AIA are not listening. “They behave perfectly as monopoly managers,” Mr. O’Brien said.

According to Mr. O’Brien, the airline’s 12-route summer schedule will annually deliver some 2.2 million customers and support 2,200 “on-site” jobs at AIA.

Ryanair recently suspended flights to Volos. Mr. O’Brien said that the company came to this decision as the charges at the Volos/Nea Anchialos Airport remained high all year around, although it is an airport of high seasonality.