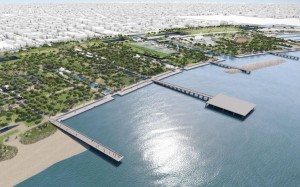 The infrastructure ministry is expected to decide on the future of planned projects along the Faliro coast, which include the completion of the Stavros Niarchos Cultural Center, in the coming days.

According to Kathimerini daily, the inclusion of the venture in the ministry’s investment program is necessary in order to launch the bidding process and pave the way for the completion of the 70-million-euro project, which includes anti-flooding and road construction works.

Late in November, Infrastructure Minister Michalis Chrysochoidis said the flood protection project tender would run immediately as an example of government’s confidence in the project.

However, according to sources cited in Kathimerini, the Commission had already expressed its objection to the project last summer, calling on the Greek government to re-examine the projects up for completion through the NSRF (National Strategic Reference Framework) grants.

In December, it requested the government slash the project as well as the works along central Panepistimiou Ave, which it said were “ornamental”, to make room for more urgent works, such as Line 4 of the Athens Metro and the completion of the country’s highways.