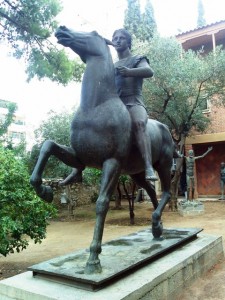 A bronze statue of Greek king Alexander the Great will be erected in central Athens, after a decision by the Central Archaeological Council (KAS).

The municipality of Athens, which has had the statue in its ownership for the past 20 years, has proposed two locations in the Greek capital: on the corner of Vas. Olgas and Vas. Amalias avenues or on Asomaton Square in Thisseio.

Crafted in 1972, by sculptor Yiannis Pappas, the work was donated by the culture ministry some 20 years ago to the municipality of Athens, but has since remained in the late artist’s yard.

The placement of the statue has been a subject of controversy over the years, culminating in the issue being tabled in parliament with accusations against the municipality of Athens that it has intentionally stalled the process.