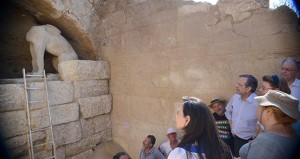 “We are in front of an extremely important find,” Greek Prime Minister Antonis Samaras said on 12 August, during his visit to Ancient Amphipolis in Serres, Central Macedonia, northern Greece, where archaeologists are digging what appears to be the entrance of an important tomb.

According to Greek newspaper Kathimerini, excavations over the last two years in the area of Kasta hill have revealed a unique grave circle that dates back to the last quarter of the 4th century BC.

The main question on everyone’s mind is who was buried there. The Greek PM said he expects the excavation to reveal this information.

There has been speculation that the tomb could contain the remains of Alexander the Great or his wife, Roxana, and their son, Alexander IV, Kathimerini reported. Roxana and Alexander IV were murdered by Cassander.

A town in Central Macedonia, Amphipolis was colonized by the Athenians in 437 BC and conquered by Philip II of Macedon in 358 BC.