By : GTP editing team
Comment: Off
Tag: Athens Mayor, commercial businesses be able to operate 10 Sundays a year, Development Ministry, featured, Giorgos Kaminis, opening shops on certain Sundays of the year, shops in the historical center of the city to operate on some Sundays, troika 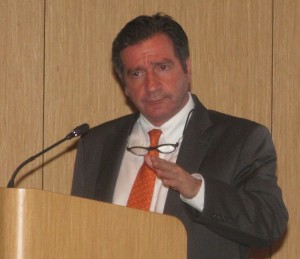 Athens Mayor Giorgos Kaminis on Tuesday, 23 April, restated his proposal for shops in the historical center of the city to operate on some Sundays and this way give tourists more options for purchases while touring the city.

Speaking at a press conference on the occasion of the Travel Trade Athens 2013 event at the Acropolis Museum, the mayor underlined that “the issue of opening shops on certain Sundays of the year should finally be brought to discussion.”

Mr. Kaminis said the operation of shops on Sundays would improve the image of the center and give tourists more choices during their visit to Athens and also boost revenue from tourism.

Development Ministry, Troika in same direction for all shops in Greece

According to the Athens News Agency, the Development Ministry intends to table a proposal in Parliament soon with which it will demand for a small size merchant to be allowed to keep his business open all 52 Sundays if he so wishes.