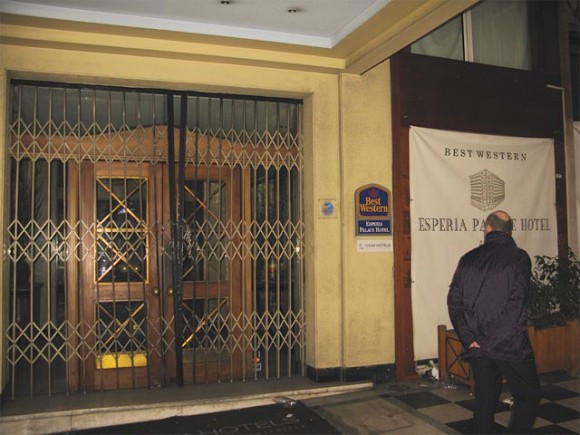 The four-star Esperia hotel now stands locked on Stadiou Street, central Athens. Before the closure of Classical Acropol and 2Fashion House, Esperia and Kanigos 21 (Halkokondili street) were shut due to high rent and the impact of the economic crisis

Centrally located hotel Classical Acropol on Omonia Square was recently closed down due to Greece’s economic crisis, according to an announcement of the Daskalantonakis Group in late January. The group controls the Grecotel chain of hotels.

According to press reports, also expected to close is the 2Fashion House Hotel located in the same area.

The drop in overnights and the high crime rate in the Omonia district in combination with high rent and low turnover hit both hotels, with a total capacity of some 500 beds. Hotel executives told the Greek press that both hotels attributed 0.5 percent of the company’s total operating profit.

However, Grecotel announced the launch of two new hotel units with a total capacity of 850 beds.

The first is the hotel “Star” in Alexandroupolis, a total investment of 19 million euros and the second hotel is “Meli” located in the prefecture of Heraklio, Crete.

The group recently forecasted that overnight stays would total to 1,443,000 this year (six percent increase from 2010) with a turnover of some 120.5 million euros and gross operating earnings of 48 million euros.