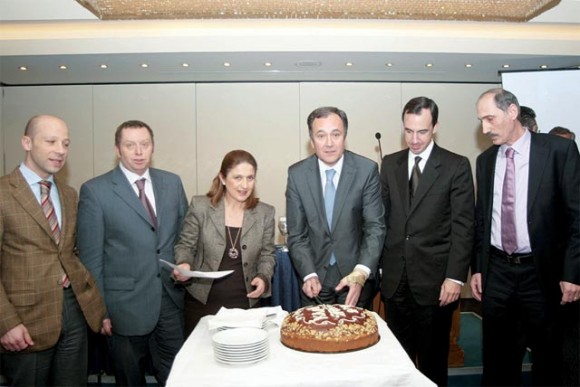 Aristotelis Thomopoulos, president of the Thessaloniki Hotels Association (center), during the association’s annual pita cutting ceremony at the Holiday Inn hotel in Thessaloniki. During the ceremony the customer satisfaction survey of hotels in Thessaloniki was presented.

The average occupancy rate of hotels in Thessaloniki last year showed a decline of 13 percent compared to 2009 thus closing 2010 at 42 percent, the president of the Thessaloniki Hotels Association, Aristotelis Thomopoulos, said last month during the association’s annual pita cutting ceremony.

Mr. Thomopoulos underlined that last year hotels in Thessaloniki showed a 20 percent reduction in turnover and a nine percent drop in the average room rate compared to 2009.

According to statistics, last year a fall in overnights by tourists from Western Europe (Germans, Italians, British and Spanish) and the United States was recorded.

Last December, Culture and Tourism Minister Pavlos Geroulanos said that cultural events held in 2011 in Thessaloniki would be connected with the Middle East and Israel in a bid to strengthen Greek ties with the two regions.

This is part of the “Thessaloniki Cultures Crossroads” that sees Greece’s second-largest city hosting a different geographical region every year for the next five years.