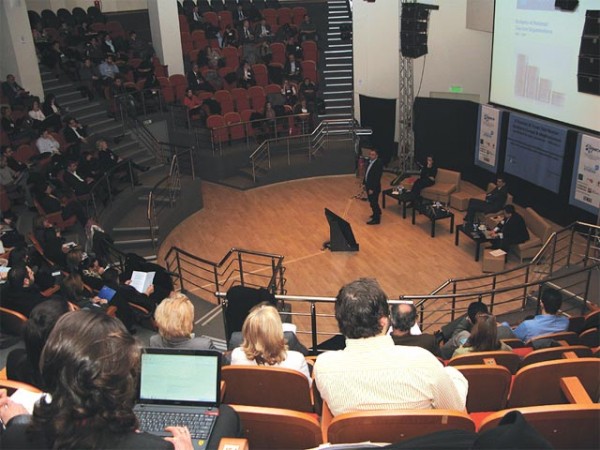 The “E-Tourism & Travel Distribution in Southern Europe & Mediterranean” conference was the first of its kind in Athens and attracted renowned names from the e-travel world and presented the current challenges and trends in the travel market.

“So far the Greek market has not been following developing trends in the tourism and travel sector, but it’s good to know that an interest exists,” said the chairman of the first e-tourism conference in Athens last month.

The conference took place at the City of Athens “Technopolis” and was organized by EyeforTravel in partnership with Travel Media Applications. 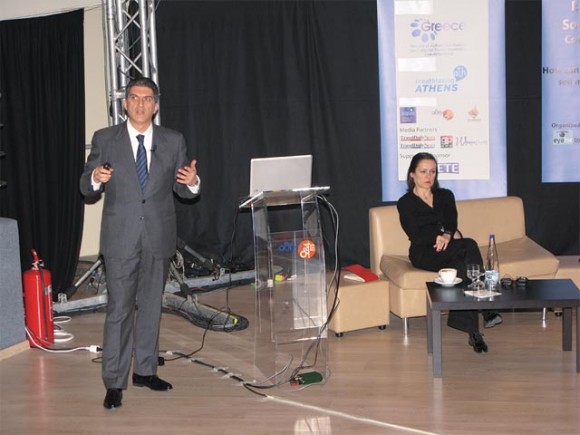 Andrea Kostner (right) presented the Vienna Tourism Board’s social media strategy, which is based on a series of simple ideas that do not apply in Greece, and received applause from George Drakopoulos, general director of the Association of Greek Tourism Enterprises (SETE). Mr. Drakopoulos spoke to the audience in regards to SETE’s integrated online marketing and social media plan.

The first day of the conference focused on e-tourism with social media, mobile applications and e-commerce and began with a keynote debate on the topic “Direct vs. partnerships and the channel battle.”

International travel professionals debated on whether to invest in trusted distribution partners, start selling direct or strive for the perfect mixture when tourist numbers fall.

Through presentations the audience learned of the costs involved and skills that are needed when selling direct and also which were the best available distribution partnerships.

The next topic that attracted a high response from the attending audience was in regards to social media and how it could allow destinations to communicate and influence the spending of their customers before, during and after their visit.

During his presentation, Hedwig Wassig, CEO of @leisure, showed ways to influence the customer through social media and predicted that in 2011 social media would become mainstream. “People will expect a response from it and more companies will invest in it,” he said. 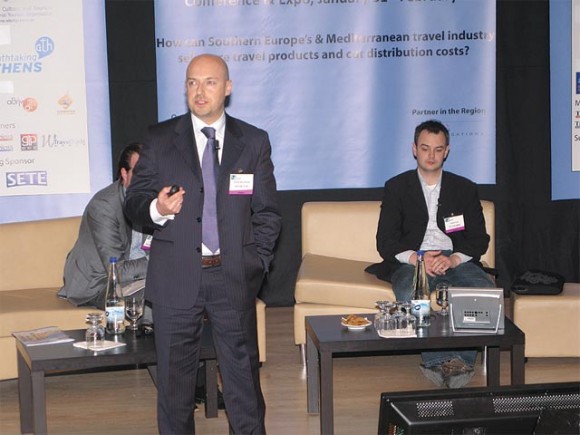 George Baliouskas from airtickets.gr presented the online travel agency’s innovative application for iPhone devices, which exceeded 50,000 downloads and has received the highest user rankings in the Greek AppStore.

Helena Egan, sales manager of hotel review/travel advice website TripAdvisor, also presented in detail the importance of social media as a communication tool for a destination, before, after and during a journey.

Ms. Egan advised Greek hoteliers to upload videos of their hotels online and said consumers expect to read reviews about their establishments.

Of particular interest was the presentation given by UK national tourism agency VisitBritain’s Justin Reid and Andrianna Conte, who explained to the audience how the UK’s tourist board decided to build relationships with international tourists via the Love UK Facebook page.

“Facebook is not getting smaller and this is much more preferable on the financial side than banner ads or advertisements through print media,” Mr. Reid said.

During the next session, experts focused on sales through the mobile phone and emphasized on how destination based travel companies engaged with their customers via mobile to increase sales. 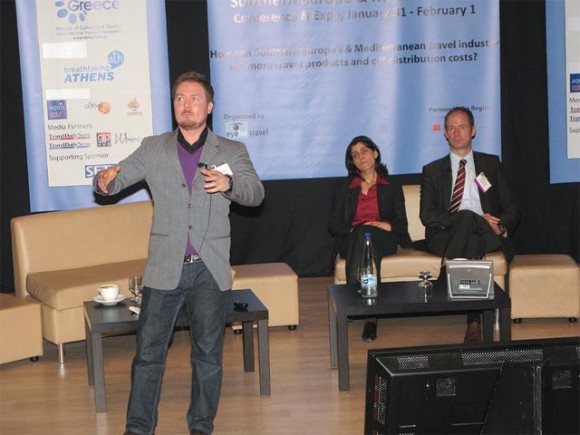 Dr. Marianna Sigala (University of the Aegean) and Rudiger Dorn (Microsoft Corporation) observe David Slocombe from lastminute.com during his lively presentation on mobile commerce in the travel industry.

“The only way to interact with your customer while he’s enjoying your product (i.e. traveling and in spending mode) is by using a mobile device,” said Koen Bavink from Sound of Data (mobile services in travel) during his presentation of personalized mobile applications used by travel companies.

The second day of the conference began with a lively discussion on the role of tourism boards in destination marketing and how they can use social media, mobile phones and location technology to attract tourists.

Andrea Kostner from the Vienna Tourism Board presented the board’s B2C (business-to-consumer) social media strategy that has proven quite successful.

According to Ms. Kostner, the tourism board concentrated on the “big players” (facebook and youtube) and positioned the Vienna brand in social web-persuasion strategy. 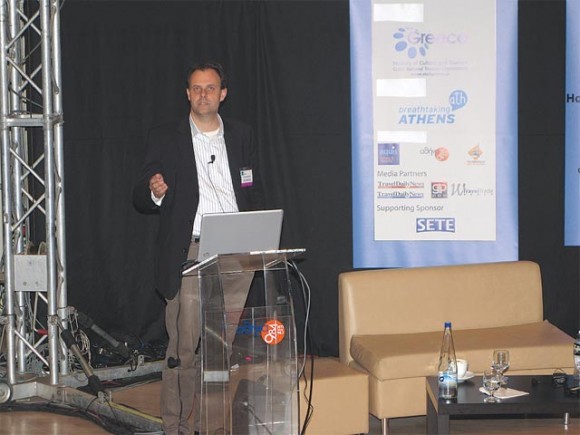 Stefan Merkenhof from GBR Consulting gave a slideshow of the “disappointing and full of mistakes” websites of various tourism boards around the world. The GNTO’s www.visitgreece.gr was also included.

“The lessons we have learned through social media are to listen and learn from your fans, take them seriously and use the power of their involvement to your advantage,” she concluded.

Travel professionals were also informed on the e-marketing trends in China through a presentation by the president of Beijing-based Dragon Trail Jens Thraenhart.

During his presentation, Mr. Thraenhart, who helps travel organizations reach and connect with sophisticated and affluent Chinese consumers, referred to a completely different reality than the Western world is accustomed to. He then gave the floor to an interesting Q and A session, as Greek professionals had many questions about the Chinese market, a very promising market for Greece. 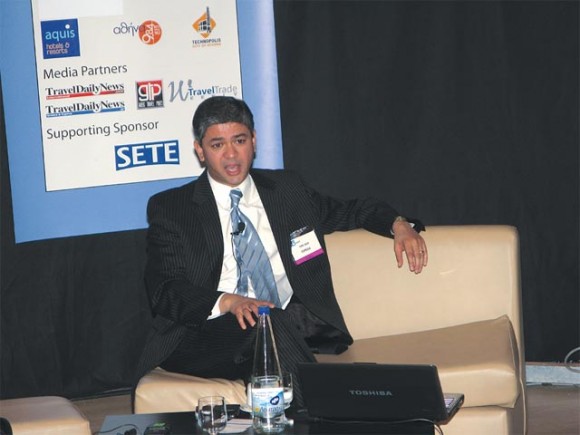 Expedia’s vice president lodging EMEA, Hari Nair, was among speakers at the e-tourism conference. Expedia recently told the Greek press that the Greek Government’s decision to lower VAT rates for hotel services, which resulted in slightly reduced room prices, had positively contributed to the attractiveness of Greek tourism.

The conference closed with a session on ancillary revenue (revenue generated from services that differ from or enhance the main services or product lines of a company). “Ancillary services have not been exploited in Greece,” according to Daniela Wagner from eWaterways.

Ms. Wagner gave an interesting presentation and presented a series of practical solutions for Greek professionals.

At the closing of the conference, it was announced that the “E-Tourism & Travel Distribution in Southern Europe & Mediterranean” conference would be held for the second time in Athens 30-31 January 2012.

Gold sponsor of the conference was the GNTO and media partners included GTP, TravelDailyNews and TravelTrade Weekly.

Religious Tourism Expo To Kick Off In March