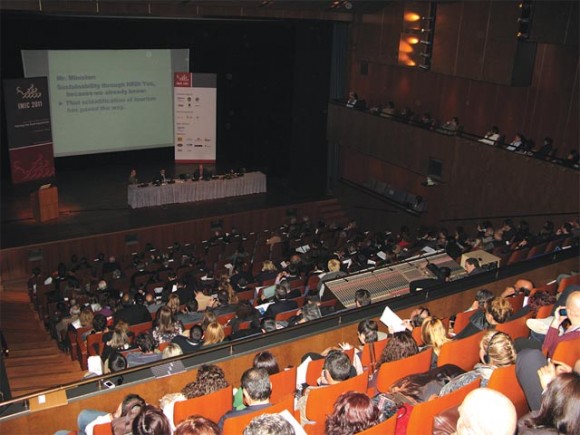 IMIC 2011, entitled “Valuing the food experience,” aimed to raise awareness and understanding about the growing importance of food in tourism for all stakeholders: the destination, tourism related businesses and local producers.

The importance of the food experience for the traveler was focused on at the seventh International Meetings and Incentives Conference (IMIC), which took place last month at the Megaron Athens International Conference Center.

IMIC 2011, entitled “Valuing the food experience,” aimed to raise awareness and understanding about the growing importance of food in tourism for all stakeholders: the destination, tourism related businesses and local producers. 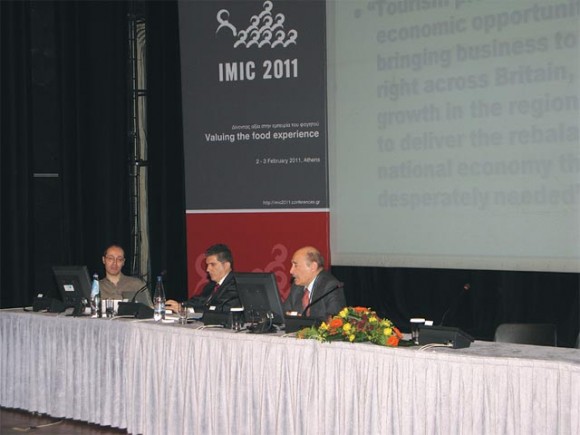 During the conference’s keynote session, Jafar Jafari, professor at the University of Wisconsin-Stout (right), gave an interesting presentation on how tourism sustainability begins with human resources development. Mr. Jafari referred to the fact that many tourism professionals are reluctant to spend money and train their staff even though this would contribute to high quality service.

During the official opening of the conference, the president of the Greek National Tourism Organization (GNTO), Nicolas Kanellopoulos, announced plans to apply a special certification to hotels that would agree to supply, along with breakfast, a range of traditional local dishes of the region of location, thus giving an extra value to the hotel product.

The GNTO president said the local Greek breakfast would be the starting point for the promotion of Greek gastronomy.

He also referred to several initiatives of the GNTO in regards to the promotion of Greek gastronomy such as further investment in the “Wine Roads” and “Routes of the Olive Tree” tourism programs and the official categorization of restaurants that offer traditional Greek cuisine (based on strict criteria).

Throughout the conference, presentation topics focused on key issues such as using local cuisine and regional foods to build a tourism destination brand, Greek breakfast, the promotion of the Mediterranean diet as a destination marketing tool, gastronomy on the web and sustainable food in tourism and hospitality. 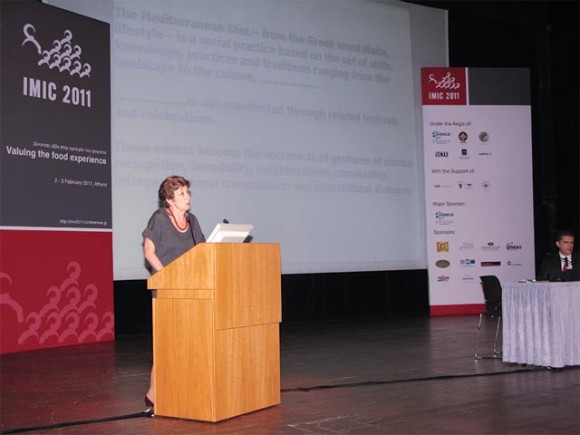 Antonia Trihopoulou, professor at the medical school of the University of Athens, focused on the Mediterranean diet as a consideration in traveling choices.

“Greek traditional food coincides with current consumer trends in the European and American markets as they satisfy two basic demands: they are health enhancing products and they possess ethnic identity,” she said.

Ms. Trihopoulou said that if Greece is to respond to this demand, mechanisms for labeling and promotion of the food products are essential as well as the certification of the “specific character” of Greek traditional foods.

“The problem is that in many cases some foods are labeled ‘traditional’ while in fact they are not…They spoil the product and the future of its promotion,” she stressed. 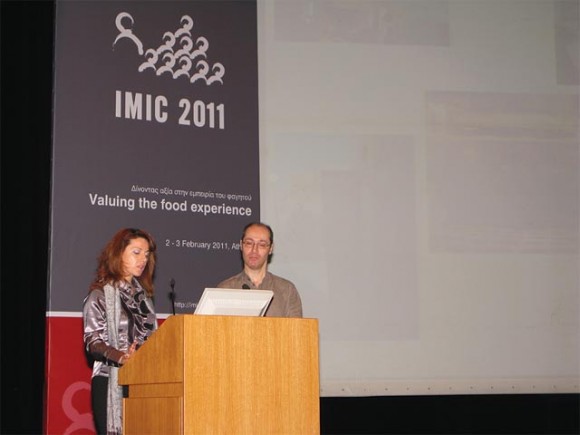 Dimitris Koutoulas, during his presentation, showed professionals that although Greece has excellent gastronomic resources, the country lacks the appropriate organization.

According to Dimitris Koutoulas, tourism and marketing consultant, there is a growing worldwide market of travelers who constantly seek authentic local cuisine, are interested in health and wellness and are willing to spend money for that purpose.

During his presentation, which focused on bringing together the world of tourism and gastronomy, he showed professionals that although Greece has excellent gastronomic resources, the country lacks the appropriate organization.

“The first step is to record the culinary resources of a destination that concerns the tourist, then make a description of that destination’s culinary tourism portfolio and then form a destination marketing strategy around this portfolio,” he said.

George Drakopoulos, General manager of the Association of Greek Tourism Enterprises (SETE) presented the association’s study “Gastronomy in the Marketing of Greek Tourism.” The study showed how a 400,000 euros marketing investment could make Greek gastronomy one of the main reasons to choose Greece as a holiday destination. 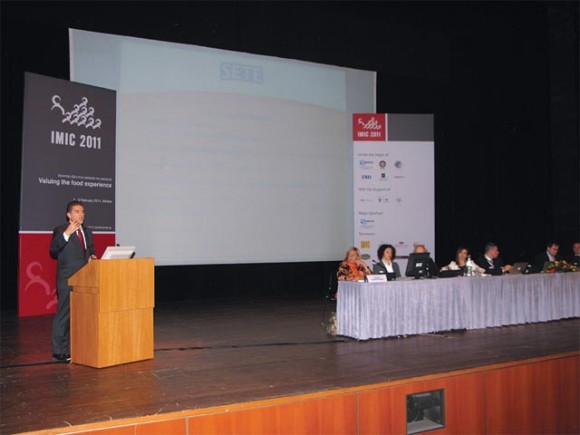 “We presented this last year and the tourism leadership loved it… What happened after that? Nothing!” Mr. Drakopoulos said.

Among the main highlights of the study was the fact that gastronomy enhances the travel experience for all tourists and attracts travelers that opt for special interest tourism.

A round table discussion was also held during the conference and was chaired by Maya Tsokli, Member of Greek Parliament and ambassador of Greek wine. Culture and Tourism Minister Pavlos Geroulanos attended the discussion.

The topic of discussion focused on building a “win-win” relationship between tourism and new wines of Greece and aimed to identify potential synergies among representatives of the tourism and wine sectors for mutual benefit. 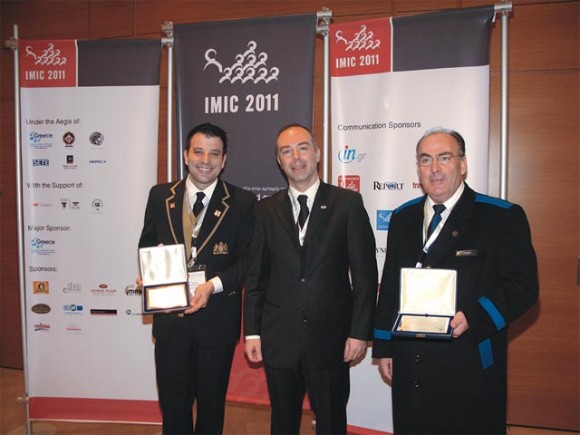 Two “unseen heroes” were awarded this year with the IMIC-SITE Greece Award of Excellence. President of SITE Greece Mihalis Argiris (center) awarded the concierge of the Hotel Grande Bretagne, Apostolos Papayannakis, and the doorman of the Intercontinental hotel, Thanasis Moursiotis, and expressed his gratitude for their important contribution in the field of business tourism in Greece.

During the round table discussion, the drafting and signing of a Memorandum of Cooperation between representatives of the tourism and wine sector was considered.

IMIC 2011 was organized by Heliotopos Conferences.