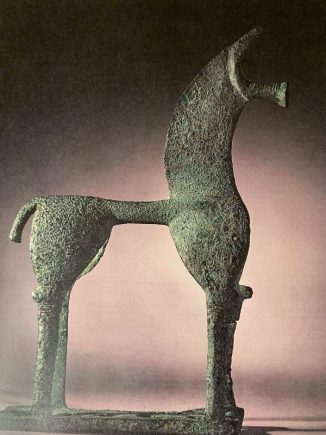 Greece is moving ahead with legal action to re-claim an 8th century BC bronze horse which appears to have been removed illegally from the country, the culture ministry said.

Mendoni briefed Bogdanos on ministry efforts to repatriate looted or trafficked Greek antiquities currently found in US collections, including a 14cm Corinthian Geometric period bronze figure of a horse which was the subject of a dispute with Sotheby’s last year, when Greece stopped its sale at an auction calling on Interpol to investigate.

The ancient Greek treasure was to go under the hammer in New York in May 2018 starting at 150,000-250,000 dollars. According to Sotheby’s, which took the case to court, the ancient Greek horse was legitimately purchased by Howard και Saretta Barnet in a New York auction in 1973, previously owned by London dealer – later accused of dealing in looted antiquities and sent to prison – Robin Symes, and before that by two dealers who had acquired it at an auction by Münzen und Medaillen in 1967.

In June this year, a US District judge rejected Greece’s claim – under the Foreign Sovereign Immunities Act – to dismiss the lawsuit.

Mendoni went on to inform Bogdanos that the ministry in cooperation with the Council of State were looking into appealing the decision.