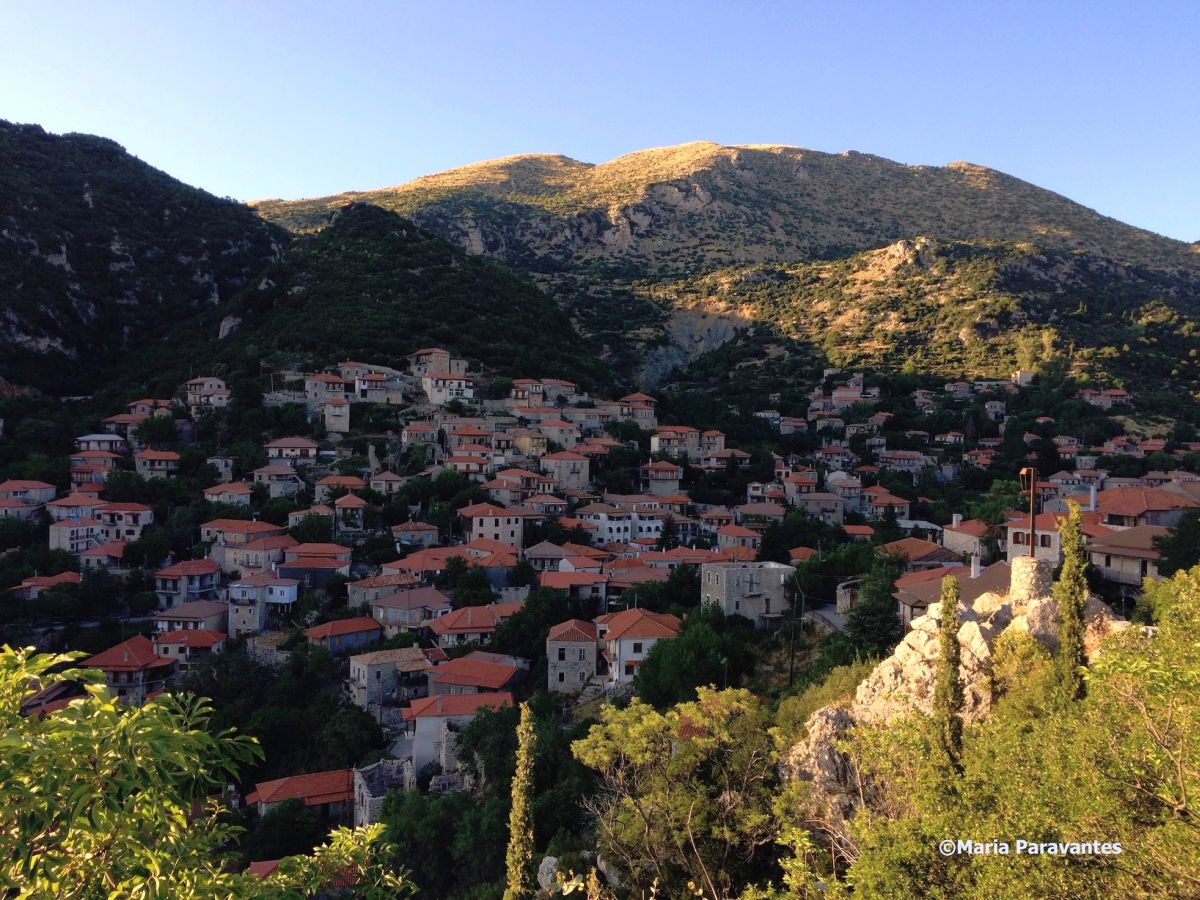 View of Stemnitsa, one of the villages along the Menalon Trail in Arcadia.

Greece’s Menalon Trail, a 75km, eight-section footpath running through nine Arcadia villages in the Peloponnese, was re-certified earlier this month during a special weekend event in the village of Stemnitsa. 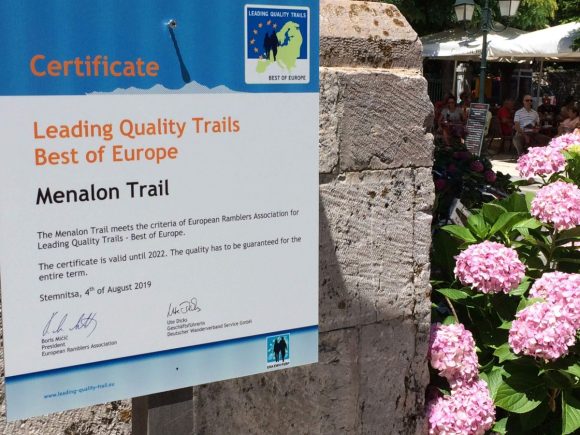 The brainchild of Stemnitsa-born Ioannis Lagos, Menalon Trail was made possible through the coordinated efforts of a group of dedicated volunteers and locals from Eastern Gortynia, with the participation of the Arcadian Mountaineers and Ecologists Club (SAOO) and the support of the Gortynia Municipality and the Peloponnese Region.

Greece’s first to receive European certification and be placed among the Leading Quality Trails – Best of Europe (LQT), Menalon Trail was re-certified by Boris Micic, the president of the European Ramblers’ Association (ERA), which represents 63 walking organizations from 34 European countries and some 3 million individual members. 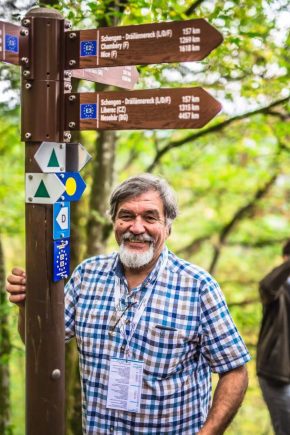 Speaking at the event in Stemnitsa attended by 85 representatives from local and regional government, Micic said four of Europe’s 16 certified trails are in Greece, adding that Europe’s long-distance trails known as “E-paths” link countries from North Cape to Crete, and from the Atlantic Ocean to the Carpathian Moutnains and the Black Sea.

Micic went on to announce that ERA was examining the creation of a new product: the Quality Regional Trails aiming to promote five regions in Europe through a network of walking routes. Micic said ERA had already set up working groups in this direction. The Peloponnese, in the meantime, is already preparing to become one of the first to meet some 35 stringent criteria and apply for regional certification in about two years’ time.

Speaking to GTP Headlines, Micic explained why Greece is evolving into a popular ramblers’ choice destination. “There are several factors. Greece has such diverse natural offerings, undiscovered nature, culture, it is the navel of European culture, and many come here to discover their origin through a comprehensive experience.”

Micic also referred to the environmental importance of the path, which attracts trekking lovers from across Europe and the world seeking to walk the trail and experience its unique beauty. 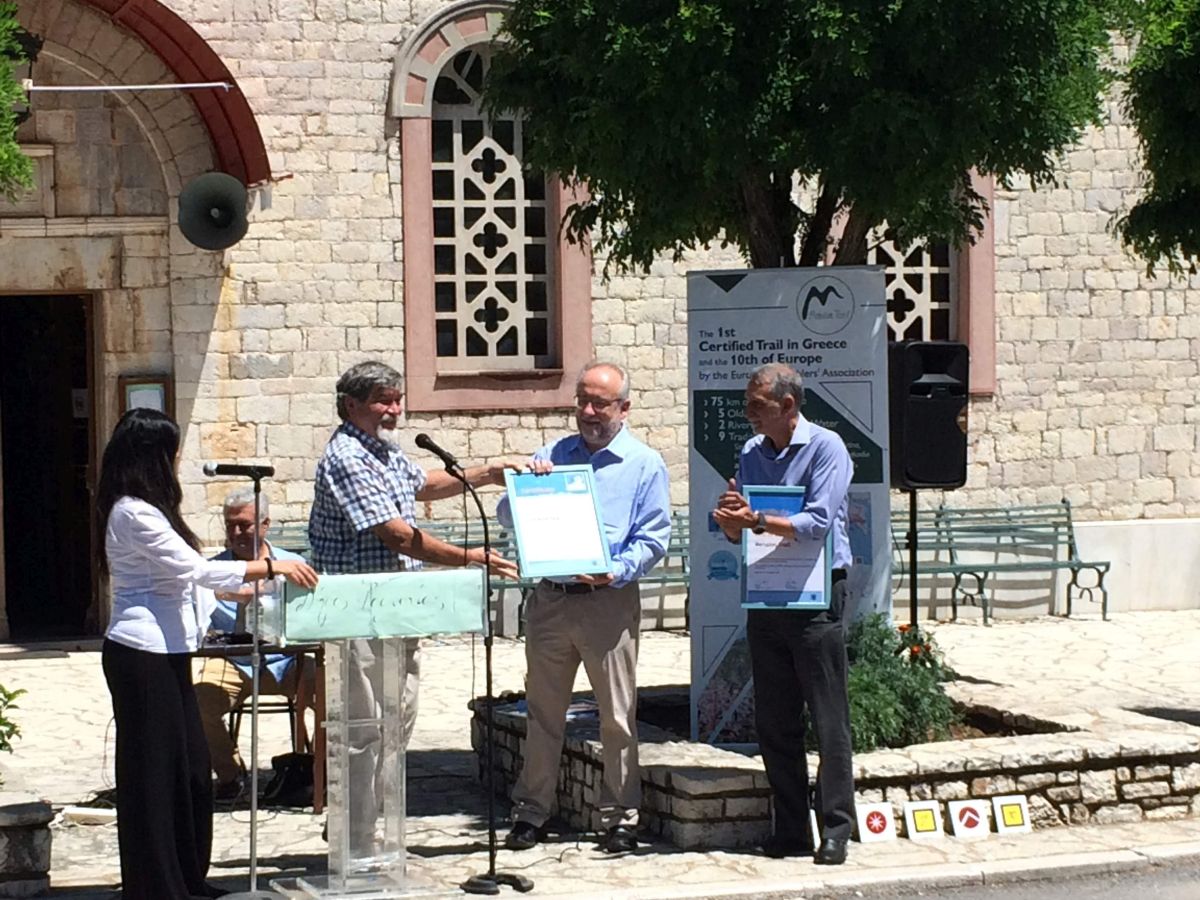 During the re-certification ceremony, Lagos announced plans to create trails for people with disability. The first such footpath has been planned to run between the villages of Elati and Vytina, he told GTP Headlines, adding that the route is ideal because it runs parallel to the water, allowing the blind, for instance, to tune into the sound, while at the same time it is mostly level with very few inclines. 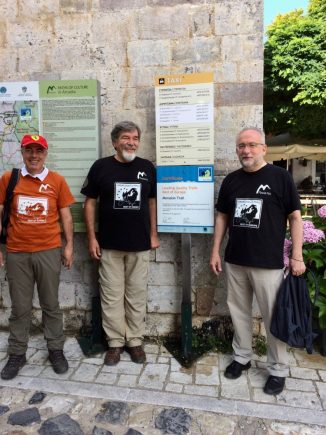 Happy and ready to inspect the Elati-Vytina trail.

“We are aiming to make the Peloponnese Region a leading trekking destination,” said Lagos, presenting the signs and logos for the in-the-making “Mythical Trails” network inspired by Greek mythology and including among others footpaths in the steps of Hercules, Hermes and the Spartans.

“Menalon Trail and its legacy Mythical Trails which runs under the Mythical Peloponnese brand name is the biggest social and solidarity economy project in Greece,” said Lagos.

Indicatively, work is underway to clear up paths criss-crossing the Peloponnese to include such destinations as Nafplio, Nemea, Olympia, Mystras, Sparta, Mt Parnonas and Mt Taigetos, among others.

“What started out as a crazy dream to open up the paths used by our ancestors as a new attraction for travelers to Greece, has now grown into 300 kilometers of trails currently being opened up, and the Menalon Trail group being called on to offer its know-how,” Lagos explains.

But what he highlights as the most important achievement of the endeavour is bringing together the locals and fostering social cooperation. 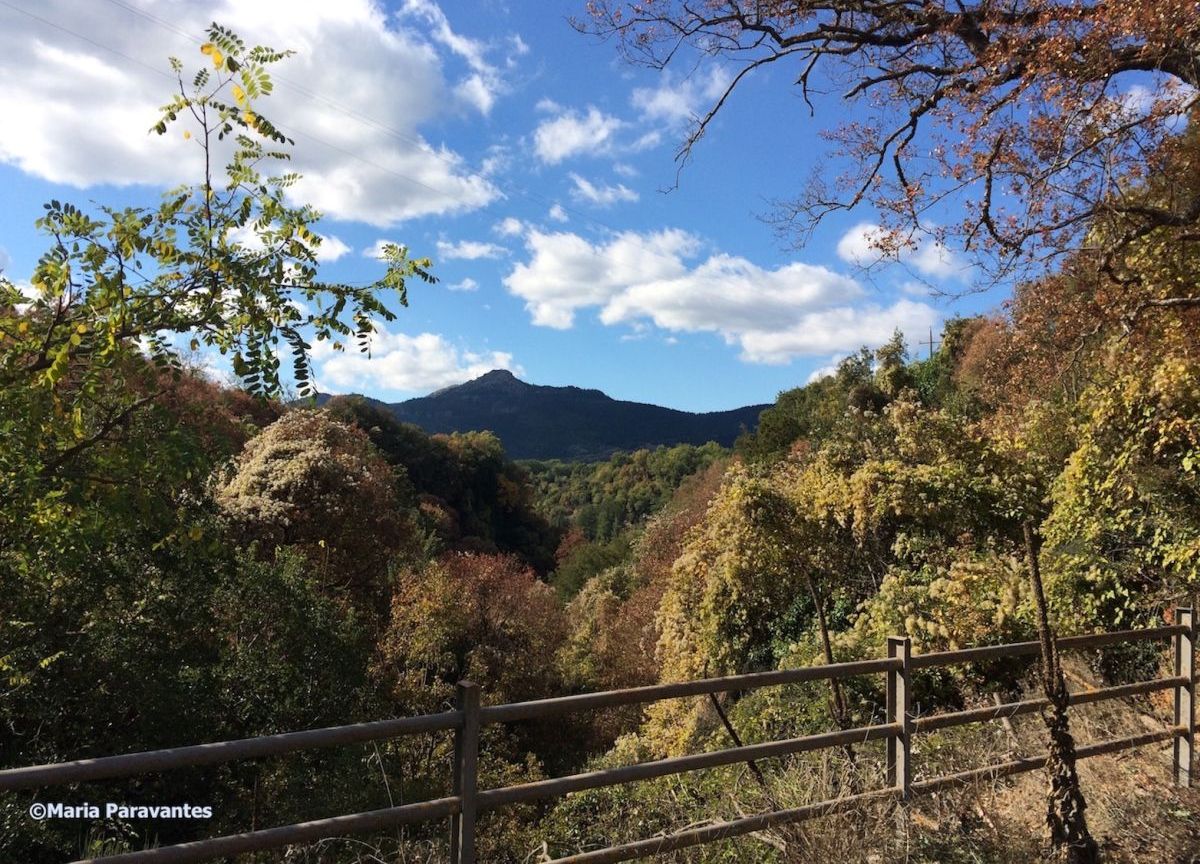 Hiking along the Menalon Trail to the village of Nymfasia.

“We have been gifted a vast source of natural wealth which we are now tapping into. More than 300km of paths are being cleared out to create a 1,500km trail linking major archaeological sites and landmarks across Greece,” Gortynia Mayor Giannis Giannopoulos tells GTP Headlines.

All stakeholders agree that the Menalon Trail has created value added. Visitor numbers to the mountainous region have increased nearly all year round. In 2017, bookings rose by 75 percent, says Giannopoulos, who is a firm supporter of balance and scale.

“We were not interested in massive investments for all-inclusive tourism, we wanted to find something that would agree with our region, a product that would showcase the beauty in a balanced sustainable manner,” he explains.

“But miracles do not happen in day,” he adds. 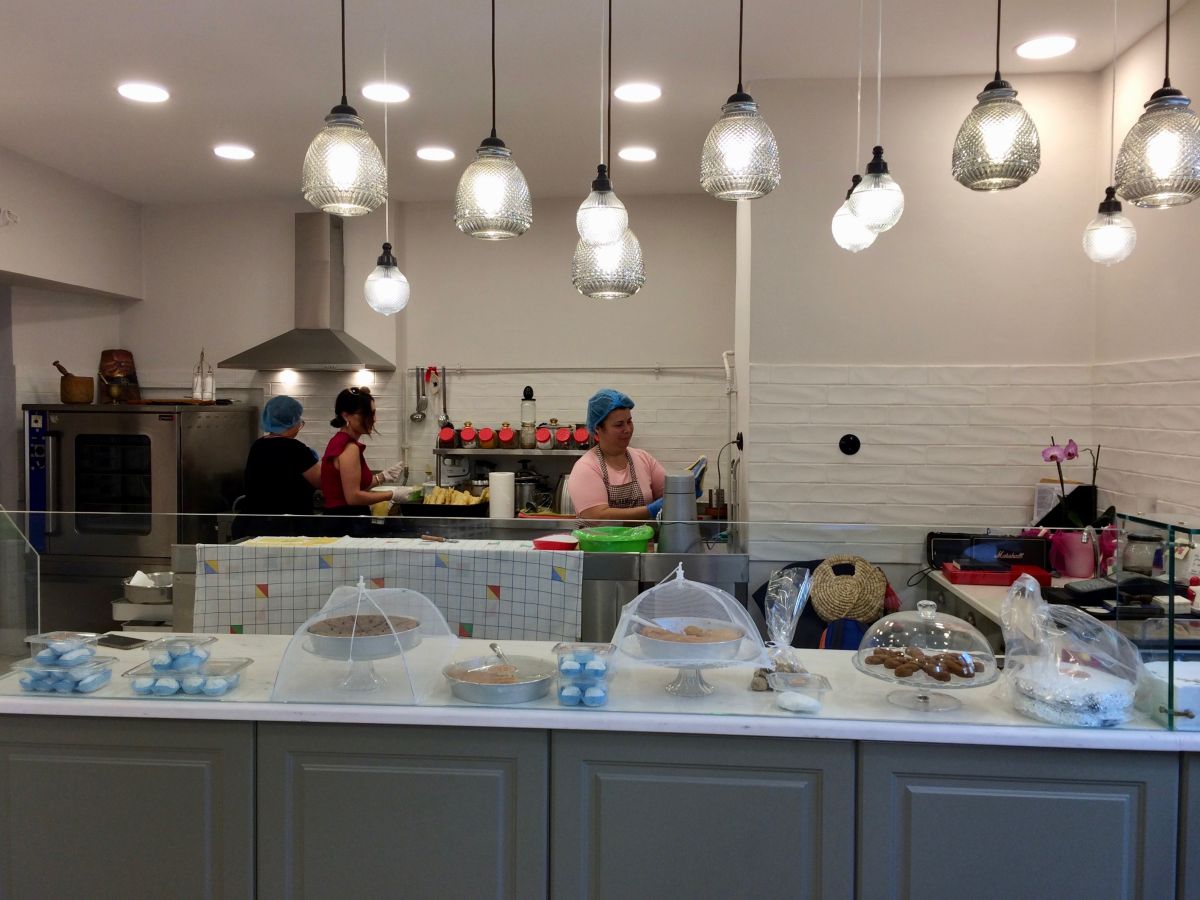 Meanwhile, the project has begun to involve more local professionals and at the same time include farmers. “Locals have come to realize that everyone stands to gain,” says Giannopoulos, adding that this alone demonstrates the model is working.

“At the same time, it is creating wealth for the local communities without destroying the environment, setting a good example, and raising awareness about the importance of safeguarding our natural habitat,” says Giannopoulos.

“And last but not least, in 1910 Gortynia suffered the loss of thousands who sought a better life elsewhere. With the Menalon Trail and its expansion, we are creating a good reason for people to return, and to bring new ideas, fresh energy and innovation,” says Giannopoulos.

Younger Crowds Returning to the Village 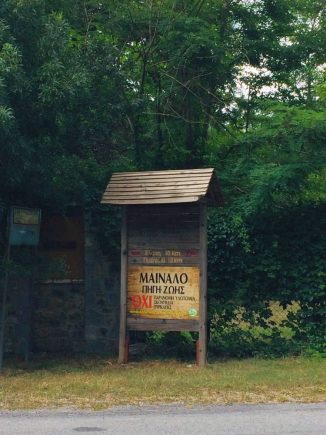 And as the saying goes, the proof is in the pudding. Two decades ago, most of the villages of Arcadia, and particularly in the remote Gortynia municipality were almost abandoned with little or no tourism infrastructure, lacking facilities and very restricted shares of the tourist market.

Today things have changed significantly. The villages of Stemnitsa and Dimitsana, as well as smaller settlements such as Nymfasia or Vlacherna (all along the Menalon Trail)  now have restaurants, cafes and small businesses run by 30-somethings seeking a better future and better quality of life.

The Menalon Trail runs along the Lousios River gorge and the western slopes of Mt Menalon, the valley of Mylaon River, through the traditional villages of Stemnitsa, Dimitsana, Zygovistii, Elati, Vytina, Nymfasia, Magouliana, Valtesiniko and Lagadia.