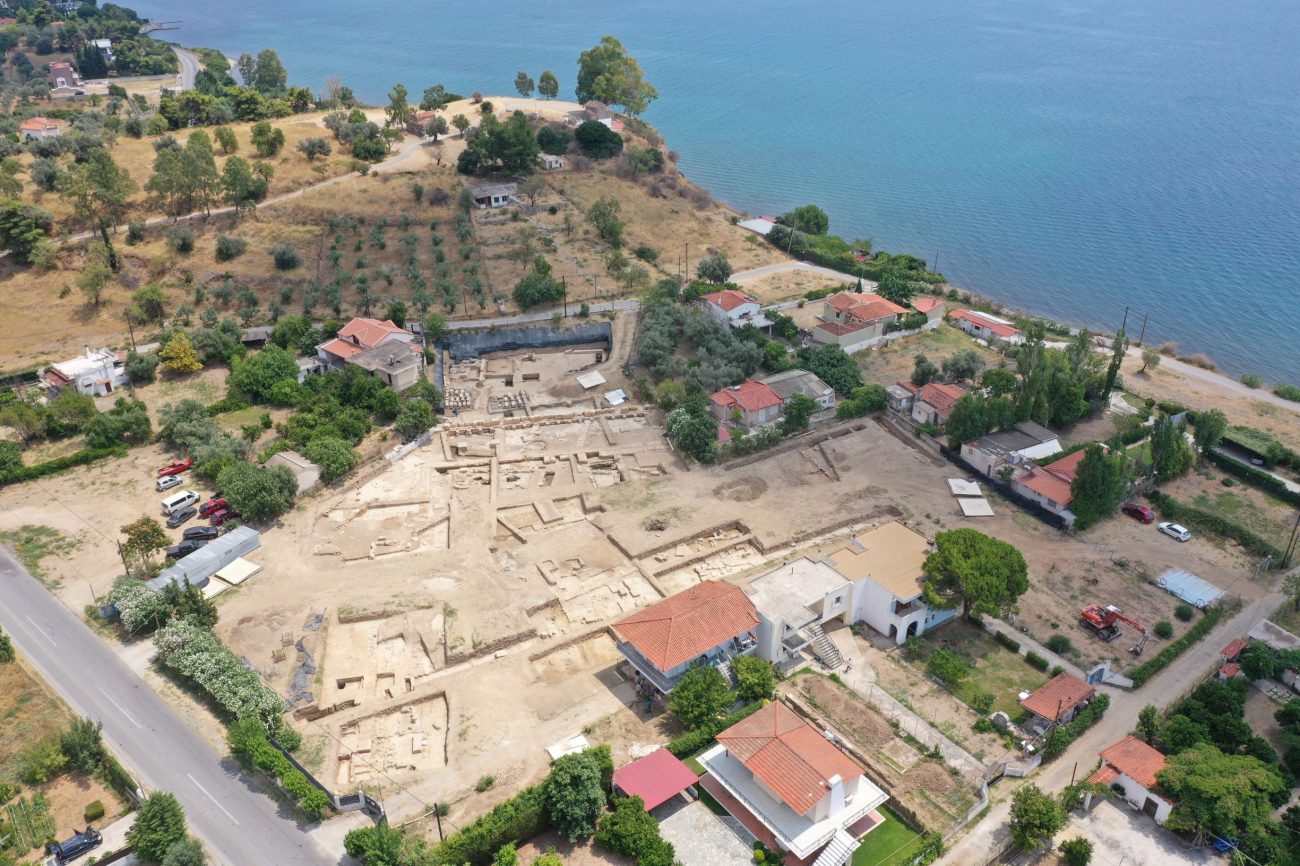 Aerial view of the excavation site in Paleochoria, Amarynthos, Evia.

For the first time excavations on the Greek island of Evia, have produced an inscription with the word “Amarynthos” found in Paleochoria, some 2km east of modern-day Amarynthos, the Greek Culture Ministry said recently. 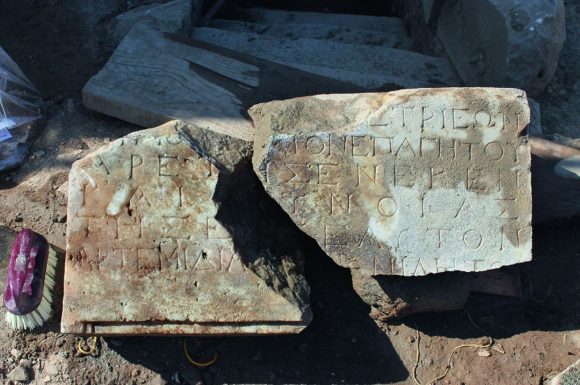 The inscription with the word “Amarynthos”.

The partially preserved inscription found at a Roman-era fountain refers to “Artemis in Amarynthos”, which according to archaeologists confirms the link between the ancient foundations of the building in Paleochoria and the sanctuary of Amarysia Artemis, believed to be the center for the cult of Artemis in Northern Greece.

This year’s discoveries complete a series of seals and other items found in 2017 with the name “Artemis” inscribed on them as it is the first time the location is clearly indicated, said the culture ministry. 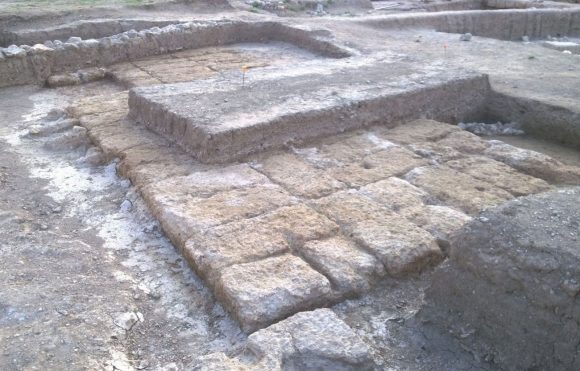 The monumental foundation which can most probably be identified with the altar of the sanctuary. 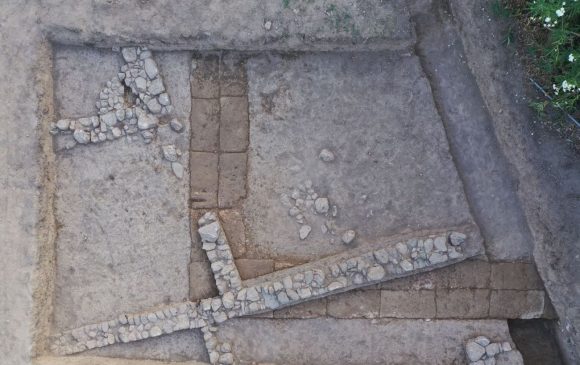 The foundation of the southern wing of the Hellenistic arcade.

The additional importance lies in the fact that the finds of the prehistoric settlement excavated in the ’70s and ’80s in the same area can now be linked with the Amarynthos location referred in Linear B tablets found in the Mycenaean palace of Thebes, which means the name and location have remained the same for 3,000 years. 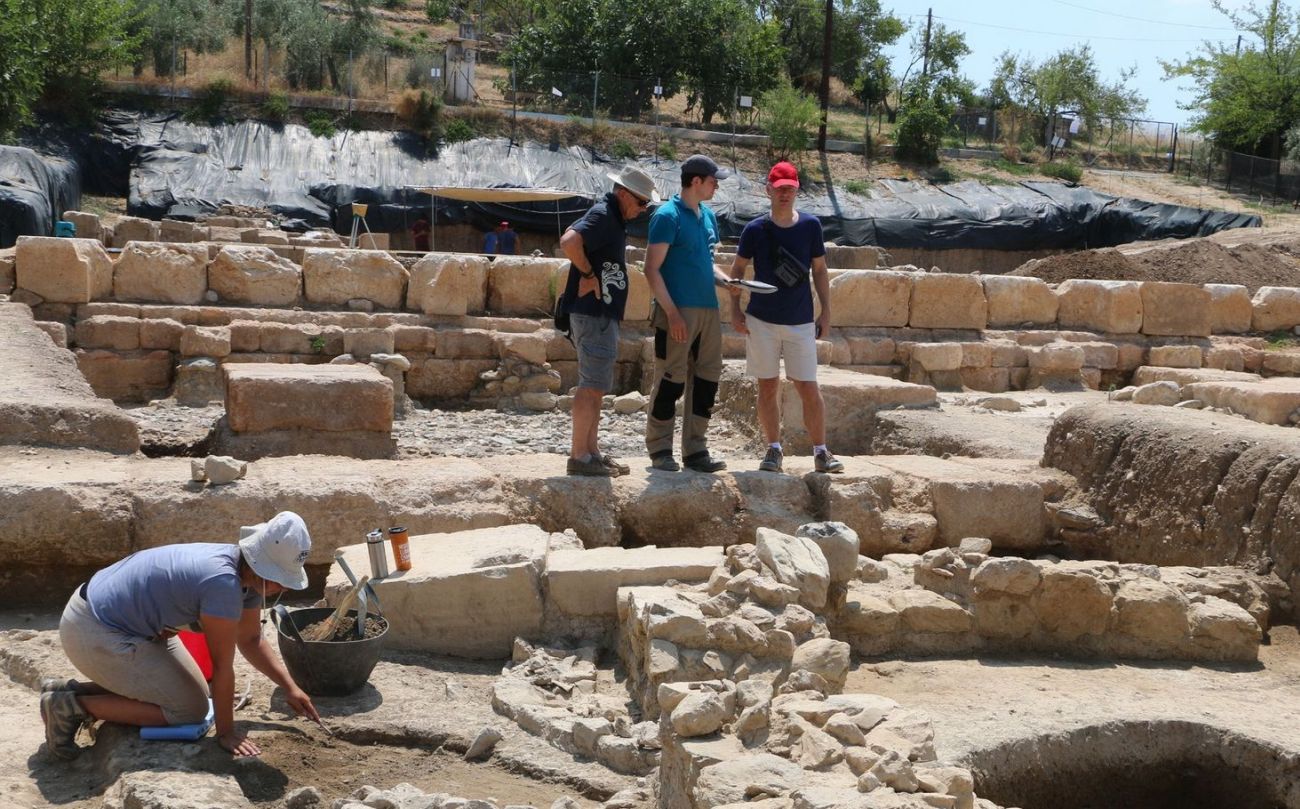 Visit of the Ambassador of Switzerland to the Amarynthos excavation site, accompanied by representatives of the Swiss Archaeological School in Greece.

Excavations carried out by the Swiss School of Archaeology in Greece and the Evia Ephorate of Antiquities have been ongoing since 2006 with the aim then to locate the sanctuary of Amarysia Artemis. 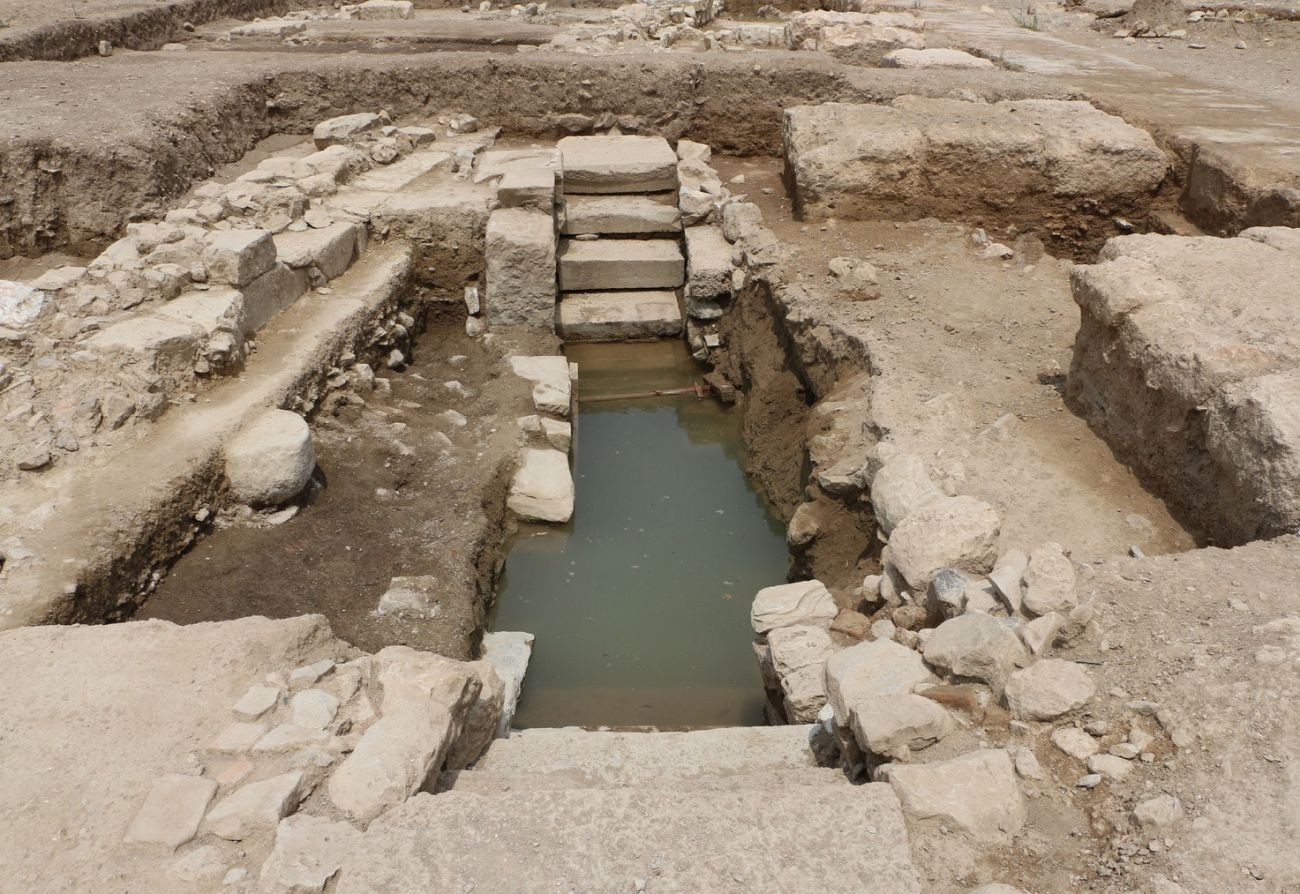 In the summer of 2017 the Temple of Artemis Amarysia was discovered some 10km from the fishing town of Amarynthos, bringing to light structures from the 6th-century to the 2nd BC, including a fountain, inscribed bases, sealed tiles, and coins with the name “Artemis”. 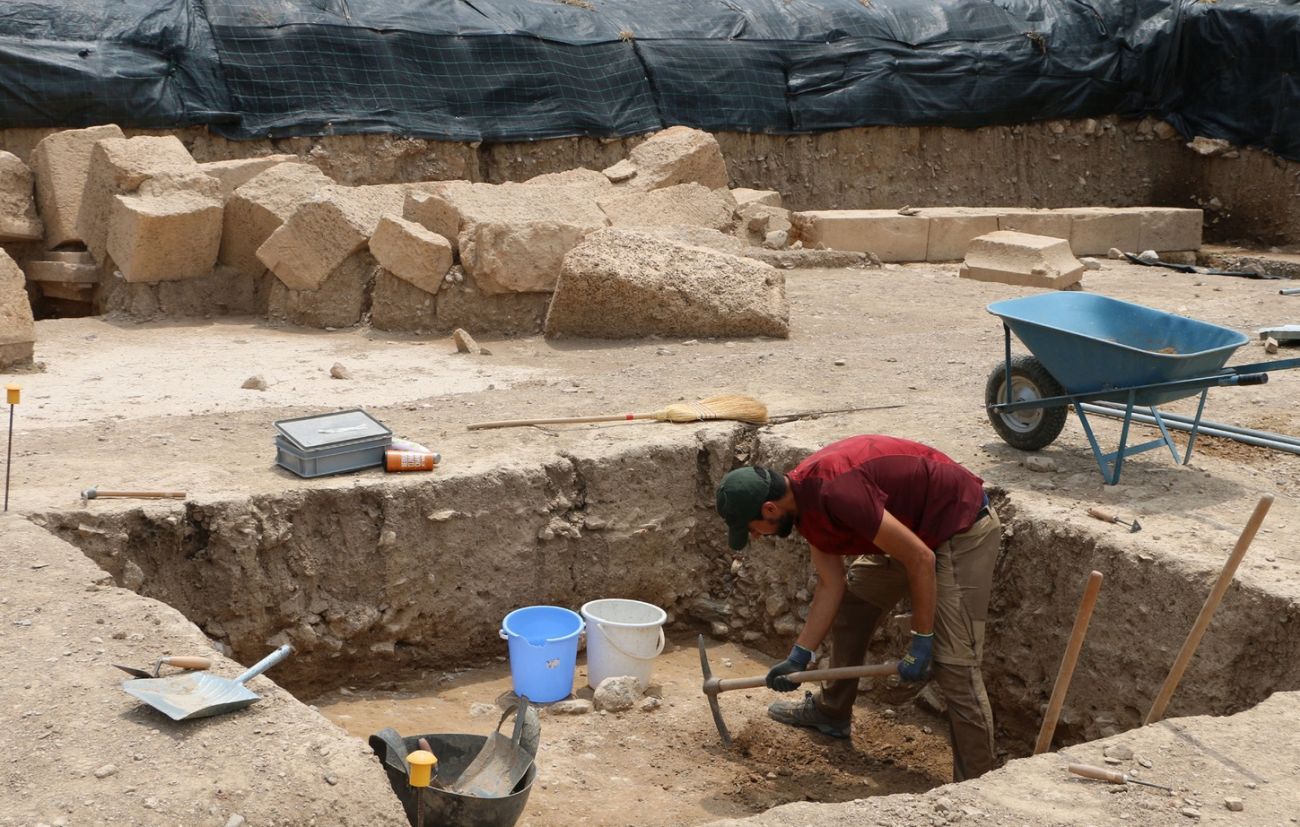 Excavation of a test section in geometric layers in front of a Hellenistic retaining wall.

Last year, the excavating team also uncovered significant treasures, including seals inscribed with the name “Artemis” as well as three Hellenistic-era foundations with votive inscriptions to the goddess, her brother Apollo and to their mother Leto, allowing archaeologists to conclude that the buildings excavated in the last decade belong to the sacred space. 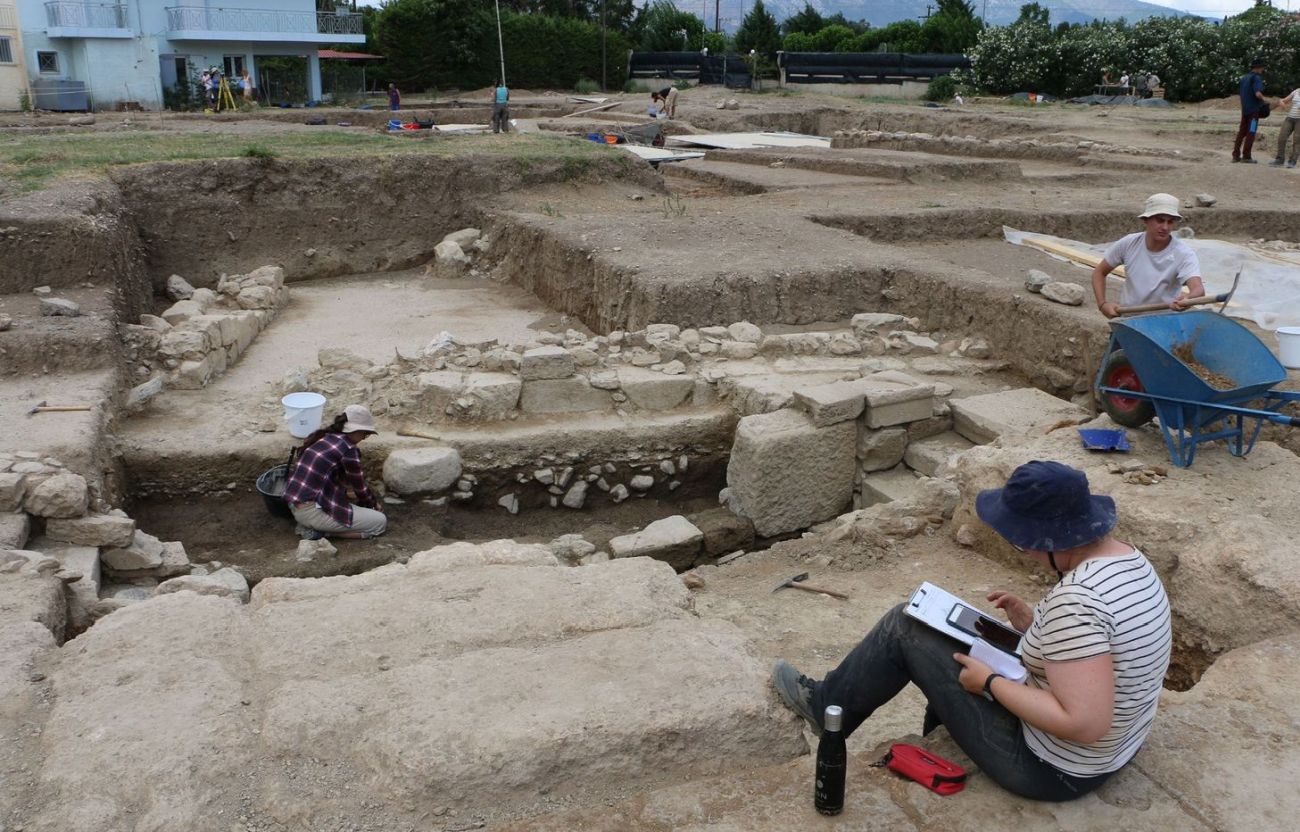 Recording the excavation with the iDig app on an iPad.

This year’s excavations, under director Karl Reber, are focusing on the central area of the sanctuary.

Amarynthos (also known as Váthia), is a coastal town located in Central Evia and part of the Municipality of Eretria. It has a popular beach and several hotels, restaurants, bars and taverns can be found in the town.