The Medieval City of Rhodes, the Old Town of Corfu, the island of Delos, Samos’ Pythagoreion and Heraion, as well as Pafos in Cyprus, are among 47 UNESCO World Heritage sites in the Mediterranean currently facing the threat of rising sea levels and erosion, according to a study released on Tuesday, in the scientific journal Nature Communications. 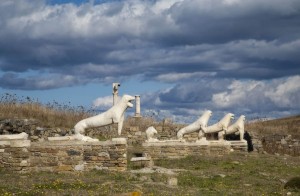 The study carried out by UK and German universities found that the risk of flood across the region is set to increase by 50 percent by 2100 and that coastal erosion is expected to rise by 13 percent. In view of these figures, the study’s scientific team said 47 UNESCO sites, many along the Mediterranean coast, would be threatened by severe flooding and erosion by the end of the century.

The majority of sites are in Italy (15), followed by Croatia (seven), Greece (four) and Tunisia (four). Sites of “outstanding universal value” include Venice, the Amalfi Coast, Tyre in Lebanon, the Archaeological Ensemble of Tárraco in Spain, Valletta in Malta, and Ephesus.

According to a report presented during UN climate talks last year in Germany, the number of UNESCO Natural Heritage sites, which include coral reefs, glaciers and wetlands, in danger due to climate change had nearly doubled in three years.