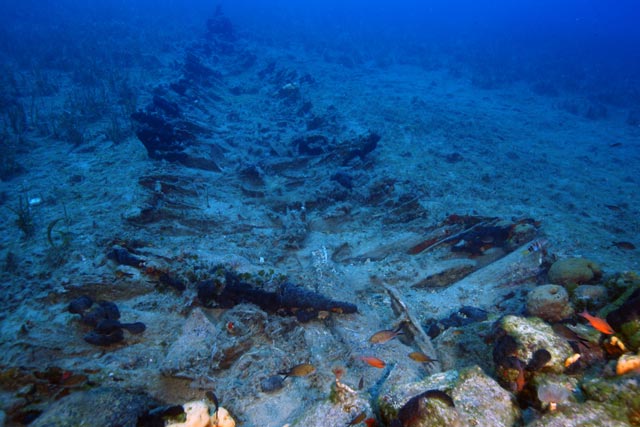 The hull of a shipwreck of the 18th century.

Eight more underwater shipwrecks where discovered and documented around the island complex of Fournoi, during the third phase of an underwater archaeological research, bringing the number of total shipwrecks found in the area to 53.

The underwater expedition was conducted by the Ephorate of Underwater Antiquities and  the Florida-based RPM Nautical Foundation between June 9 and 29.

The remains date from the Classical times to the first half of the 20th century and include a 4th century B.C. ship carrying a cargo of amphorae from Chios; a Roman shipwreck loaded with Dressel 38-type amphorae for salted fish of Spanish origin, two late Roman-era shipwrecks with amphorae dating to the 6th and 7th century A.D. and a wooden craft of the interwar period, which sank after 1929.

The number and the variety of the cargoes discovered — with many of them being of foreign origin — indicate that Fournoi was a significant hub in antiquity and connected a broad network of sea routes, according to an announcement by the Greek Culture Ministry.

According to RPM Nautical Foundation, 22 shipwrecks were identified during the first season of the underwater research in September 2015 in the Fournoi archipelago, while 23 additional shipwrecks were discovered in June 2016.

Fournoi is a collection of 13 islands and islets located between the Aegean islands of Samos and Ikaria. The expedition will continue through 2018.