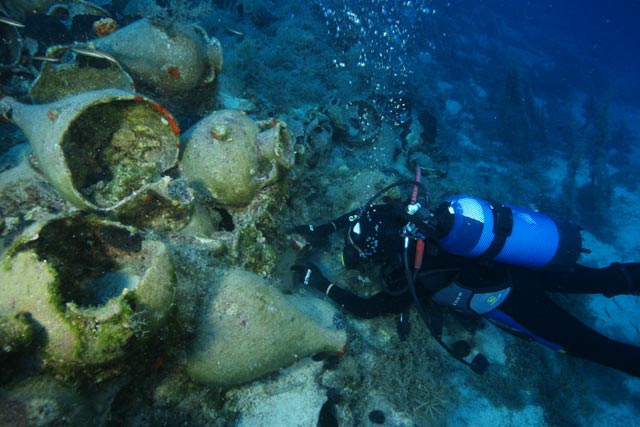 Besides sunken ships, hundreds of individual finds, such as pottery amphorae and cooking pots, were also found.

The number of shipwrecks found around the Greek island complex of Fournoi comes to 45 after a second archaeological research mission uncovered and documented 23 more wrecks during June 8-July 2, the culture ministry said this week.

The hull of a shipwreck of the 18th century.

The new discoveries, which come on top of the 22 discovered in 2015 on tips from local fishermen and sponge divers in a 17m2 area, make the Fournoi archipelago one of the richest sea regions in ancient artefacts, with 20 percent of all known shipwrecks in Greek waters found there.

Located between Ikaria, Samos and Patmos, the Fournoi wrecks are not only significant due to the sheer number but also because they span over 2,000 years of Greek maritime history with the oldest of the 45 wrecks dating between 525 and 480BC.

Besides the sunken ships, the ministry said hundreds of individual finds, mainly pottery, amphorae, cooking pots, plates, storage jars, a lamp and anchors, were also found demonstrating the significance of sea trade on this key maritime crossroads of the Aegean.

The expedition was carried out at depths of up to 65 meters under the direction of George Koutsouflakis, archaeologist with the Ephorate of Underwater Antiquities, in collaboration with Peter Campbell of the Florida-based RPM Nautical Foundation.

The expedition is set to be completed in 2018.