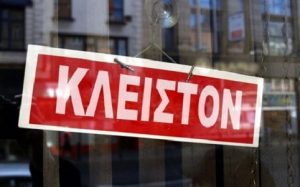 Small and medium-sized enterprises and larger supermarket chains oppose to a recent government decision to keep shops open on 30 Sundays a year.

Greece’s major retail trade players are expressing their opposition to a recent decision by the government to keep shops open on 30 Sundays a year citing exorbitant costs, with the hospitality sector, saying it will better promote city break destinations if stores remained open.

The decision, which is among the demands of Greece’s international lenders, has sparked the outrage of small and medium-sized enterprises as well as of larger supermarket chains.

AB Vassilopoulos issued a statement calling on the government to re-examine the decision which it says is lacking a legal framework. Sklavenitis, the largest Greek-owned supermarket chain with more than 500 sales points across Greece, is said to be reconsidering the decision. Electrical appliances chain Electronet said in a statement it issued on the decision: “respecting its members, customers and employees across its 81 branches throughout the country, [Electronet] believes the decision can only be detrimental to society, businesses and the economy”.

The trade sector is citing the high cost of operating stores on Sundays. Expenses for employees’ salaries are high, they say, adding that thus far the pilot opening of shops on Sundays did not increase consumer spending. At the same time, Greece’s Federation of Private Employees points to an additional problem: employers are partly or not declaring employees who work on Sundays often paying less or not at all.

Meanwhile, on the other end of the spectrum, the Hellenic Hotel Federation (HHF) believes the decision to keep shops open on Sundays will boost tourism destinations, particularly city break destinations like Athens and Thessaloniki.

The federation’s president, Yannis Retsos, said the issue must be discussed among all interested parties but underlined that it is vital stores at main tourist destinations remain open on Sundays, citing the example of other European cities, where shop owners can decide on the opening hours themselves.

Following the May 7 strike, SMEs have said they will resort to the State Council against the decision.