Greece’s islands will once again come into the spotlight through the Cyclades Trail Cup, which this year sees more destinations added to the sports event of trail running races.

The 2017 Cyclades Trail Cup will include six races on the islands of Naxos, Amorgos, Syros, Andros, Donousa and Tinos. The aim of all races is to promote the locations in which they are held and develop sports tourism as a whole.

This year’s event will kick off with a new race on a new destination: the Naxos Trail Race will be held on April 30 on the island of Naxos. 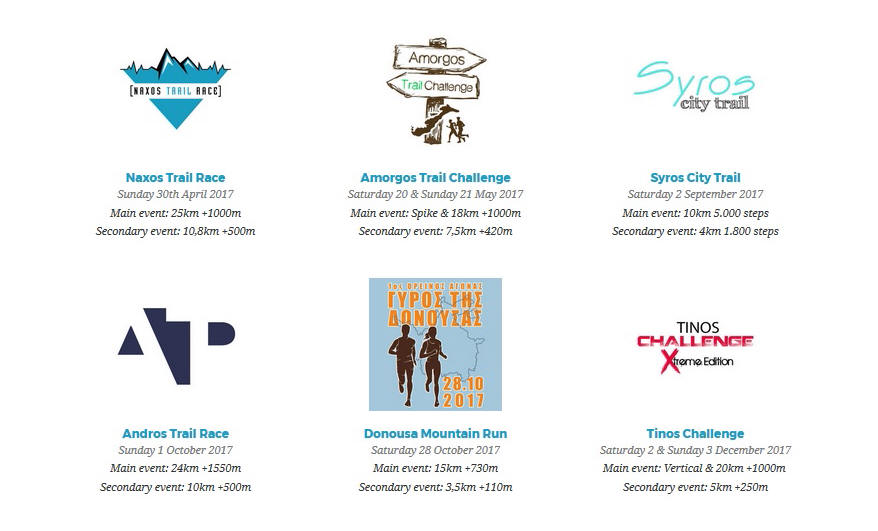 The Cyclades Trail Cup event took place for the first time in 2016 and included three islands (Tinos, Syros and Andros) and 600 runners from Greece and abroad. Besides the purely sports nature of the event, the Cup promoted the cultural and environmental heritage of the Cycladic islands, bringing runners to remote villages and their inhabitants and introducing them to the local gastronomy.

The event’s concept was established as an umbrella for the efforts of individual organizers in the Cyclades, for the creation of a series of trail running races with a common vision.

The Cyclades Trail Cup includes Trail Running, Mountain Running and City Trail races. A specific style of running is demonstrated on each island while each event is focused on the particular features of each destination.

The organizers of the Cyclades Trail Cup attend sports and tourism events and fairs in Greece and abroad, aiming to ensure cooperation with foreign race and travel organizers so as to boost the promotion of the Cycladic islands.

The Greek Travel Pages (GTP) is a Golden Media Sponsor of the Cyclades Trail Cup 2017.

For more information on the event, press here.