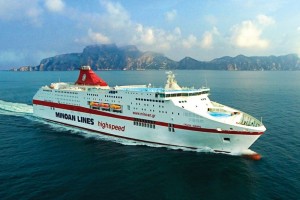 Ferry company Minoan Lines is amending its itineraries on the Piraeus – Heraklion line and Patras – Igoumenitsa – Ancona -Trieste line, due to the announced 24-hour strike in Greece by the Panhellenic Seamen’s Association (PNO) on Thursday, November 24.

Furthermore, the vessel H/S/F Knossos Palace will depart from the ports of Heraklion and Piraeus on Friday, November 25, as follows:

Adriatic Line
On the North Adriatic line, due to the strike, the itineraries will be amended as follows:

– Departures from Greece – Italy
Patras – Igoumenitsa – Ancona (Cruise Europa)
Departure from the port of Patras, on Thursday, November 24, when departure is permitted.
– Departures from Italy – Greece
Trieste – Ancona – Igoumenitsa – Patras (Cruise Olympia)
Departure from the port of Trieste on Thursday, November 24, at 04:30, as per standard schedule.

For further information regarding Minoan Lines’ scheduled departures, passengers are advised to contact their travel agent, Minoan Lines general or premium sales agents, on the telephone numbers 801-11-75000 (landline) and 18175 (cell phone and landline).