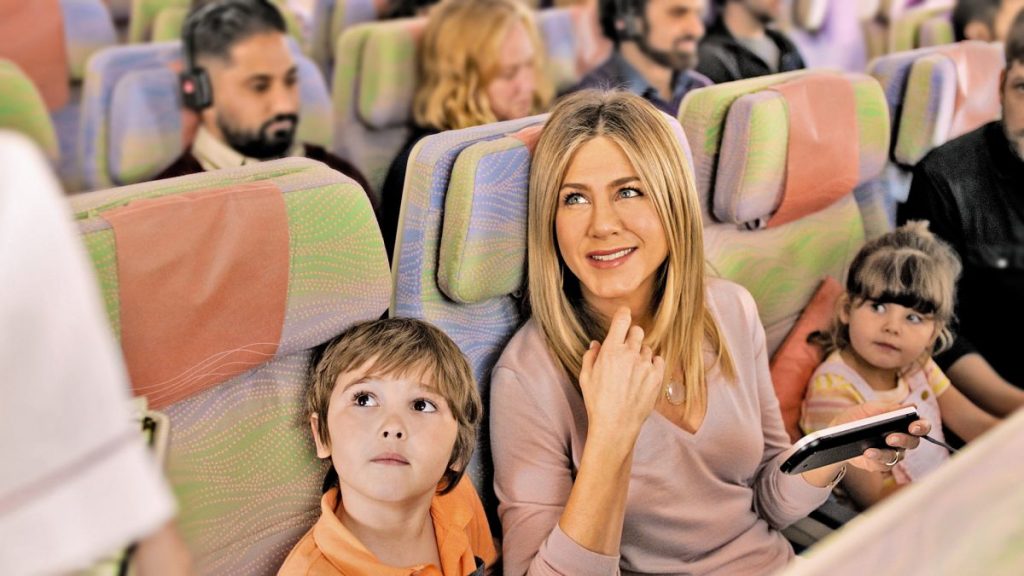 Jennifer Aniston and her young co-star Cooper onboard the A380 in the new Emirates TVC.

Hollywood actress, director and producer Jennifer Aniston makes a return to the Emirates A380, and makes a new friend, in a new global digital and TV advertising campaign for the airline.

The ad builds on the success of the first Emirates-Jennifer Aniston ad launched last year, a much talked-about campaign which quickly went viral.

“We were overrun with requests to see Jennifer again. She has an enduring, universal appeal that is at once sophisticated, but also down to earth – a great match for our brand”, Boutros Boutros, Emirates’ Divisional Senior Vice President, Corporate Communications, Marketing & Brand, said.

“This new ad perfectly captures the fun, spontaneity and glamour of flying on Emirates, and we are confident audiences will find it as memorable as the first.”

In a similar vein to the first light-hearted TVC, the Golden Globe and Emmy award-winning actress brings her distinctive personality, classic style, and a touch of humour, to showcase the A380.

In the ad, Jennifer befriends Cooper, a feisty young boy who she finds playing in her Private Suite in the Emirates First Class cabin, while she was freshening up in the Shower Spa. The two strike up a conversation and build rapport, as they stroll through Emirates’ Business Class cabin and Onboard Lounge. Sitting on the stairs between the lower and upper decks of the aircraft, Cooper tells Jennifer about his aspirations to become a pilot – of “this plane”, pointing to his model Emirates A380 aircraft. In Economy Class, Cooper is finally reunited with his surprised parents where Jennifer chooses to remain and enjoy Emirates’ ice inflight entertainment system with Cooper. The ad ends with Cooper’s mother relaxing in Jennifer’s Private Suite, having exchanged places with the Hollywood star.

The TVC was directed by industry veteran and Oscar-nominee Bryan Buckley, who is acclaimed for his numerous Super Bowl ads. The script and creative concept was a collaboration between Buckley and Emirates’ in-house advertising team and produced in conjunction with the WPP Group.