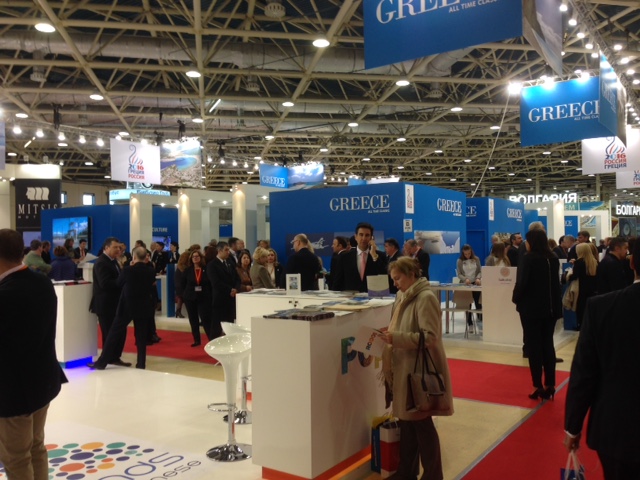 Moscow’s International Travel and Tourism Exhibition – MITT recently wrapped up its 23rd edition with many positive signs for Greece, the Greek National Tourism Organization (GNTO) said in an announcement on Monday.

The GNTO took part in MITT 2016 (March 23-26) with a stand that occupied 805 square meters and hosted a total of 47 Greek exhibitors, including sector professionals and leading Greek tourism enterprises.

According to the GNTO, the MITT expo confirmed the excellent relations between the two countries and the expected increase of Russian tourists to Greece this year.

2016 is the “Year of Greece” in Russia and the GNTO expects this to play a major role in Russian arrivals this year.

On the sidelines of the exhibition, Alternate Tourism Minister Elena Kountoura and GNTO Secretary General Dimitris Tryfonopoulos held meetings with leading Russian tour operators who announced that they would enhance their travel packages for Greece by adding new destinations for travel.

The tour operators stated that they intend to serve the growing demand for Greece this year and also attract travelers from Russian cities associated with Greek destinations via direct routes.

During the meetings, both sides explored ways to further strengthen the cooperation between the two countries so as to extend the season for Greece and also enrich travel packages with alternative forms of tourism, such as religious, thermal and gastronomy tourism.

In addition, at a special event organized by the Embassy of Greece in Russia in cooperation with the GNTO Office in Russia, Mr Tryfonopoulos launched an innovative mobile app created by the renowned My Planet television producer, Alexei Nikulin. The application, jointly created by people that have been travelling to Greece for 26 years, is a useful guide that allows Russian tourists to receive proper directions and obtain reliable information in a very short time.

The Greek Travel Pages (GTP) was an official media partner of MITT 2016.

Works on Paros Airport in the Pipeline?