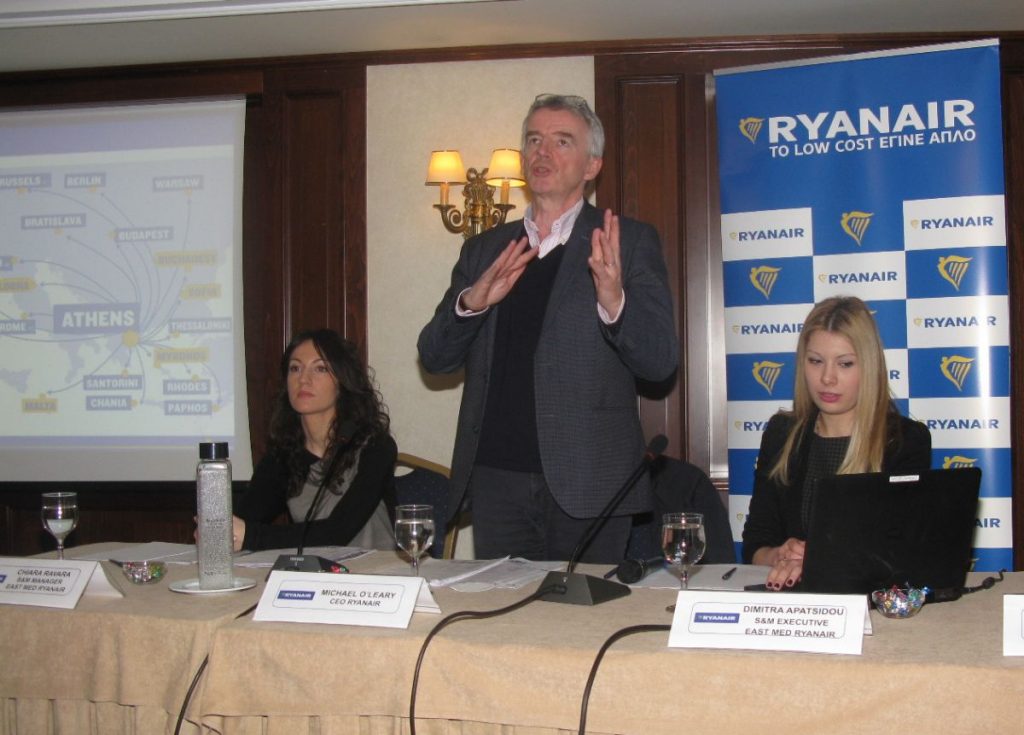 Ryanair is expanding its presence in the Greek capital, according to the airline’s Athens winter 2016 schedule which was presented at a press conference on Tuesday.

The airline’s winter schedule (November 2016-March 2017), which sees a sixth Ryanair aircraft based in Athens, the opening of six new routes (reaching a total of 19 routes from Athens International Airport) and an increase of frequency on two further routes, is expected to deliver 3.4 million customers per annum (up 25 percent).

Through a total of 30 routes in Greece this year, Ryanair’s traffic in the country is expected to grow to approximately 6.5 million passengers per annum as a result of the expansion by the low-cost carrier.

Ryanair: “We want to grow in Athens, but…”

Speaking in Athens, Ryanair’s CEO Michael O’Leary informed journalists that the company in December approached the Greek government with a development plan — a growth discount scheme — that promises to bring 10 million passengers over the next four years to Greece, provided the airport charges at Athens Airport are reduced.

“We are still waiting for a reply,” he said and added that incentives are key for development.

He also noted that the respective proposal has already been accepted by the German, Italian and Spanish airports and wondered why Greece has yet to respond.

Referring to the 40-year concession of 14 Greek regional airports to Frankfurt-based transport company Fraport, Mr. O ‘Leary said that the deal could prove “bad for consumers” as airport prices may increase. He added that the government should have chosen a bidder that would also be obligated to increase passenger traffic while managing the airports.