WTM 2015: The Peloponnese Experience – All in One Plus More 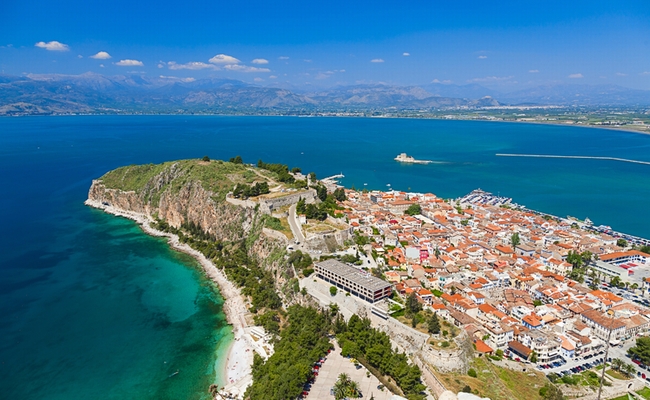 It’s accessible, it’s diverse, it’s home to Greece’s foremost historic monuments, its coastline is endless, it hosts a number of World Heritage sites, it combines sea, sun and mountains, and its culinary traditions are highly sought after. This is the Peloponnese and these are the reasons a visit is a must, explains Sotiris Varelas, Special Advisor on Tourism for the Region of the Peloponnese.

(From left) Sotiris Varelas, Special Advisor on Tourism for the Region of the Peloponnese and Konstantina Nikolakou, Vice Governor for Development Works, at the region’s stand at WTM 2015.

Speaking to the Greek Travel Pages (GTP) on the sidelines of the World Travel Market (WTM) in London last week, Mr Varelas revealed the regional authority’s plans for the promotion of the region beyond the traditional four-month tourism season.

“We here in the Peloponnese have two issues to address: firstly, that we have traditionally handled 70 percent of Greek travelers and 30 percent from abroad. With the recent crisis, Greeks refrained from traveling so amongst our goals is to boost the destination profile and attract more foreign holidaymakers,” Kalamata-born Varelas says, adding that new deals with Aegean, EasyJet and soon with British Airways offering direct flights to Kalamata airport, will resolve this.

“Secondly, the Peloponnese has traditionally been considered more of an attraction and less of a destination, which means that people come to the region to visit a number of its significant sites but rarely opt to stay here and make it their holiday destination. Indicatively, the Peloponnese accounts for 7 percent of all accommodation facilities in Greece, but only 3 percent of overnight stays. This is the gap we’re trying to fill,” Mr Varelas says.

In this direction, the regional authorities launched the “10 Experiences” campaign — experiences involving gastronomy, heritage, history, walking routes, beaches, wellness and luxury — in efforts to redefine the Peloponnese “brand” and boost the number of arrivals and overnight stays.

“We have based our entire promotional strategy on the ’10 Experiences’, which combines everything from myths and religion to gastronomy and alternative sports, and on participation at international travel fairs,” Mr Varelas adds.

He also points out that ABTA’s (Association of British Travel Agents) decision to hold their 2015 Travel Convention at Costa Navarino in Messinia, last month led to improved “identification” of the Peloponnese as a destination… and “we’ve seen this in practice here at the WTM with many visiting our booth and through our B2B meetings”.

The region’s main markets are the UK, Germany, Italy (thanks to direct access via the port of Patra), Scandinavian countries, France and Russia.

The Peloponnese, Mr Varelas explains, can offer exclusivity and cater to the needs of the individual tourist at a friendly price thanks to its large number of small- and medium-sized businesses. “The trend now is to veer away from mass tourism and the sea and sun concept. Of course, vacationers come here for the sea and sun, but they also want that special something, they want to enhance their stay with diverse experiences.”

As for the extension of the tourist season, regional authorities agree and stress that the Peloponnese can cater to the rising demands of such a decision. “The Peloponnese already does,” Mr Varelas says, “particularly the mountain regions of Arcadia and Corinth, which operate all year round.”

The gastronomy of the Peloponnese was presented at WTM 2015.

“Our primary goal is to prolong the visitors’ stay,” Vice Governor for Development Works Konstantina Nikolakou tells the GTP.

“The region, particularly Kalamata — due to the airport — and Nafplio have seen an increase in MICE tourism thanks to the sheer variety and quality of facilities,” she says, “but we are also offering unique experiences whether at the newly announced diving park in Tyros, the climbing park at Leonidio, the Menalon Trail.”

Mrs Nikolakou revealed that the region is currently looking into partnerships for the construction of waterways at key Peloponnesian locations including Loutraki, Monemvasia, Pylos and Kalamata, which will further boost incoming traffic.