The possibilities of supporting the tourism side of Lesvos through the UNESCO network were explored on Tuesday during a meeting held at the Tourism Ministry in Athens.

Lesvos is one of the islands in Greece that have experienced the greatest influx of refugees and migrants this year. Earlier this month, the Tourism Ministry and the Greek National Tourism Organization (GNTO) announced the launch of targeted promotional actions for such islands in order to offset potential impacts on tourism. 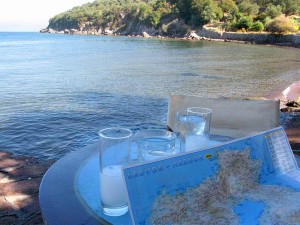 Chaired by the Tourism Ministry’s alternate general secretary, Gerasimos Zacharatos, the meeting was held to discuss extra promotional actions in support of Lesvos in view of the 2016 tourism season. The meeting was attended by the president of the GNTO, Elissavet Chatzinikolaou; the president of the Hellenic National Commission for UNESCO, Ekaterini Tzitzikosta; and the secretary general of the Hellenic National Commission for UNESCO, Christina Boulakaki.

On behalf of Lesvos were representatives from the island’s recently set up crisis management committee, namely the regional vice governor of tourism for North Aegean Region, Nikolaos Katrakazos and the president of the Lesvos Chamber, Evaggelos Mirsinias.

During the meeting, talks focused on cooperation possibilities between all parties and the launch of targeted actions to prevent and offset potential impacts the refugee issue has left on the island’s tourism.

According to an announcement, the representatives of Lesvos agreed to return soon with solid proposals, which will then be considered and implemented as far as possible by the ministry and the GNTO.

The tourism ministry plans to launch similar actions for other islands in the region.

On Monday the Lesvos Hoteliers Association expressed concern in regards to official plans for the creation of a “hot spot” on the island, where refugees and migrants arriving in Greece will be documented and registered, before continuing their journey or deported back to their country of origin.

In a letter to the Economy, Development and Tourism Minister Giorgos Stathakis, the association submitted various proposals and wondered what exactly the “hot spot” on Lesvos would mean for the island and the region in general.

World Premier of ‘Delos 2015’ Documentary to Screen on Mykonos