Boosting the mutual flow of tourism and developing common strategies for the cooperation of sector enterprises between Turkey and Greece was the focus of the Greek-Turkish Tourism Workshop held in Izmir, Turkey, on April 6.

Held under the auspices of the Greek Embassy in Ankara, with the participation of the Hellenic Association of Travel & Tourist Agencies (HATTA), the event examined ways to jointly promote the two countries’ tourism offerings.

In this direction, HATTA President Lysandros Tsilidis stressed the need for close cooperation between professionals in both countries which would involve, among other things, the exchange of tourists and joint actions towards the development of Greece-Turkey package deals.

Mr Tsilidis further underlined that both Turkish and Greek travel agents must observe Greek law concerning excursions and trips to Greece, and announced that HATTA and TURSAB (Association of Turkish Travel Agencies) had agreed to sign a Memorandum of Cooperation in this direction. 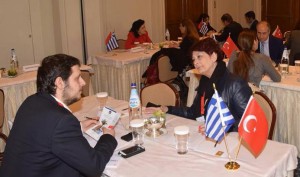 HATTA’s president also said that Greece and Turkey should team up and organise deals called “2 Centre Holidays” promoting joint Greece-Turkey travel packages to overseas third countries and regions such as China, India, North and South America, as well as work together to organise trade shows, roadshows, workshops in these destinations.

On the sidelines of the event, Mr Tsilidis and his counterpart, the president of TURSAB, Basaran Ulusoy, also discussed the future projects to be developed between the two associations.

In the meantime, speaking at an Athens event in late March, Turkey’s Culture and Tourism Attache in Athens Asli Aksungur said Turkish visitors to Greece are expected to reach one million this season.