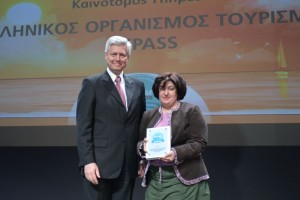 The Greek National Tourism Organization (GNTO) added a third award to its roster of credits for its dedication and innovative work towards the promotion of Greece as a primary tourist destination worldwide.

The GNTO was recently awarded the Gold Tourism Award for Innovative Service for its MPASS – Visit Greece Samsung TV Application during the March 12 Tourism Awards 2015 in Athens.

At the same time, Expedia Media Solutions awarded the GNTO with the “2014 EMEA Destination Campaign of the Year” prize during the EMEA Partner Awards, held earlier this month at the ITB in Berlin.

In the meantime, the country’s central tourism bureau was also recently awarded for its four-minute promotional video titled “An Eternal Journey” (in the “country” category), produced to commemorate the 100th anniversary of the GNTO (1914-2014) during the 14th International Tourism Multimedia Awards, which took place on the sidelines of the ITB in Berlin earlier this month. Produced by QKas Productions to the music of Dimitris Papadimitriou, “An Eternal Journey” takes viewers on an audio-visual tour of the history of the GNTO.