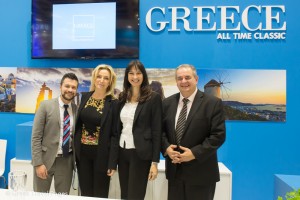 The Greek National Tourism Organization (GNTO) was announced on Thursday as one of the recipients of the 2014 EMEA Partner Awards of Expedia Media Solutions, the advertising division of the Expedia group.

The annual EMEA Partner Awards were given during ITB Berlin and are part of Expedia Media Solutions’ global awards program which recognizes original and groundbreaking campaigns with exemplary innovation and success in digital marketing and advertising.

The GNTO was recognized by Expedia with the “2014 EMEA Destination Campaign of the Year” award.

Following a long economic recession that had taken a toll on tourism, the GNTO engaged Expedia Media Solutions to develop a campaign that would increase visitors year-round.

Expedia Media Solutions created the “What’s your pleasure?” campaign, leveraging integrated landing pages, GNTO’s social platforms, banner ads, and a Pinterest sweepstakes to drive engagement with U.S., UK and Australian audiences. The landing pages made it easy for travelers to explore four exciting cities in Greece, along with a series of activities, under the thematic pillars of culture, gastronomy, adventure and leisure. Banner ads on Expedia and Travelocity points-of-sale and social platforms like Twitter, Facebook and Google+ sent all users to the Pinterest competition, where they could win a dream holiday to Greece for two people.

By making it easy for travelers to discover new and exciting destinations and activities in Greece, the campaign delivered robust results. Compared to the prior year, passenger demand for travel to Greece increased in key markets: 30 percent in Germany, 34 percent in Australia, 37 percent in the U.S., 65 percent in the UK and 195 percent in India.

Along with the GNTO, Expedia’s winners for this year include: