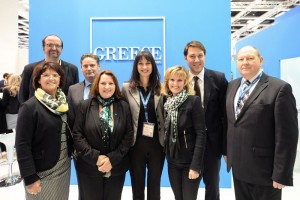 Greek Alternate Tourism Minister Elena Kountoura with the Tourism Committee of the German Bundestag at the Greek stand.

Since ITB Berlin launched on Wednesday, Alternate Tourism Minister Elena Kountoura has been meeting with key partners from the German tourism industry to inform them on the Greek government’s intention to enrich the country’s tourism offer.

The tourism minister held a series of meetings with travel and tourism professionals including representatives from TUI, Thomas Cook, DRV, Condor Airlines and Air Berlin, aiming to build linkages and boost tourism to Greece.

The Tourism Committee of the German Bundestag also visited the Greek stand. The German officials assured the minister that German citizens have only “friendly feelings” towards Greece and intend to choose the country as their holiday destination this year.

According to market research institute GfK, year-to-date bookings for 2015 to Greece from Germany, by end of January 2015, were up by 12.8 percent compared to the same period last year.

On her part, Ms. Kountoura said that German visitors are among the most loyal tourists to Greece and assured that that they are always welcome with love and the renowned Greek hospitality.