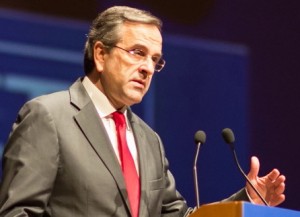 Tourism and uncertainty do not go together, Prime Minister Antonis Samaras said on Friday from Rhodes in the context of New Democracy’s pre-election campaign just two weeks until elections.

“Tourism’s oxygen is stability, security and credibility,” the Greek PM said while delivering a speech to an audience of the island’s residents, local authorities and tourism professionals.

During his speech, Mr. Samaras spoke of tourism’s great importance to the country’s economy and referred to a number of issues related to Greece’s tourism development and the islands.

“I believe in Greek tourism… And I believe that tourism can take Greece even higher,” he stressed.

The PM assured that if New Democracy is elected, the reduced VAT rates that apply on the Aegean islands will not be abolished.

He also said that 30 percent of the funds from the new National Strategic Reference Framework (NSRF) will be promoted to regions for rural development programs and fisheries.

On the South Aegean Region’s effort to create a waterway network, the PM said that the region has his party’s support. “With waterways throughout our country, we will become the pinnacle of the modern, global tourism industry,” he said.

Mr. Samaras also applauded the Rhodian archaeological exhibit at the Louvre Museum in Paris, an initiative of the South Aegean Region.

“This is the way forward…To highlight Greece and continuously promote our treasures that are our major competitive advantages… Extroversion and culture are keys to success.”