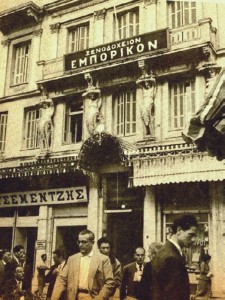 The Emporikon, a historic hotel building in the heart of Athens, is set to open its doors on New Year’s Day after more than half a century.

For decades derelict and vandalized, the 700m2 hotel on Aiolou St in central Athens has been given a new lease on life with restoration work to be completed by the end of the year.

Opposite Agia Irini Square, the trendiest part of Athens as of late, the four-story hotel is being restored to its past glory, its 14 rooms and suites offering guests the finest views of the cityscape. With direct access to the Greek capital’s main attractions: Monastiraki Square, the Plaka borough and the Acropolis, the Emporikon will open as a 5-star boutique hotel.

The art nouveau-style building served central Athens tradesmen in the 19th century as an economy class hotel when the Greek capital was flourishing. It shut its doors with the outbreak of World War II in the ’40s and remained closed and abandoned until this day.

The building was declared a landmark in 2006, and in 2011 the Secretariat of the Central Council for Modern Monuments approved its operation as a hotel.

The building was leased in June this year to Anastasia Pappa, founder and owner of “Τhe New Athens Story”, a company active in the development of tourist units in the last 15 years.