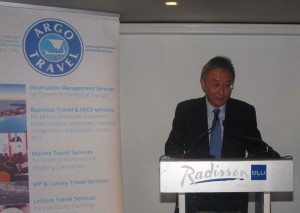 Speaking at a gala event hosted by Argo Travel Group in Athens, attended by some 70 Indian tour operators and Greek travel agents, the ambassador underlined that there has been improvement on the visa front on which both sides have been working on.

“Meanwhile, easy connections are readily available that could be exploited fully,” he said.

The Ambassador informed that the Government of India Tourist Office in Milan, which covers Greece, is in close collaboration with the Indian Embassy to promote tourist numbers between India and Greece. 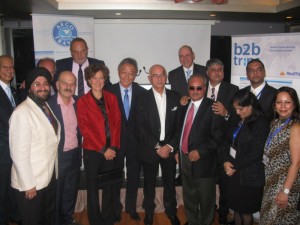 “I assure you that Greece is and will be a winning destination for your clients from India… The Greek government and its private sector are keen to attract Indian tourists and Bollywood,” he told the Indian tour operators.

According to the Indian Embassy in Athens, a large majority of Indian travelers are between the age groups of 20s to 50s, most of whom are leisure travelers who tend to holiday along with their family and extended families. There are those who are looking for wedding destinations, others are business travelers and then there are the ever present Indian IT software experts and those attending conferences and seminars.

“There are over 13 million outward bound tourists and the figure could be higher now,” the ambassador noted. 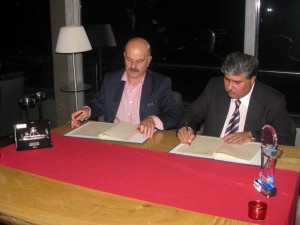 Argo Travel Group’s gala event was held within the framework of a familiarization trip hosted by the Hellenic Association of Travel & Tourist Agencies (HATTA) for members of the Outbound Tour Operators Association of India (OTOAI). The fam trip aimed to offer OTOAI’s members firsthand experience of what Greece has to offer as a destination.

During the event, a Memorandum of Understanding (MOU) was signed between the two associations to boost travel between Greece and India.

“People-to-people contact through the medium of tourism generates much goodwill and understanding and the MOU that you have signed today will contribute towards consolidating Indo-Greek relations,” Ambassador Topden said.

The ambassador added that the Indian Embassy in Athens will support the new ventures between HATTA and OTOAI.