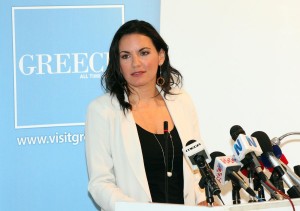 “Tourism proved that it can be the locomotive of the Greek economy,” Tourism Minister Olga Kefalogianni said on Thursday 9 October in Parliament, during the debate on a vote of confidence requested by the coalition government. The debate began on Wednesday and will conclude on Friday.

“Tourism was the first sector of the economy that recovered, posting record-breaking figures this year, boosting local economies and giving hope to our fellow citizens that better days are coming,” Mrs. Kefalogianni said.

During her speech, she referred to the tourism ministry’s cooperation with all tourism stakeholders, such as SETE, the Hellenic Chamber of Hotels and workers in the industry. She then focused on the tourism ministry’s institutional interventions and communication policy that changed the country’s image abroad.

“The goal of 20 million visitors may become a reality by the end of the year. The figures are impressive,” she said.

Citing data from the Bank of Greece, Mrs. Kefalogianni informed Parliament that, so far, Greek tourism has brought the country a 13.4 percent increase in revenue and a 15.6 percent rise in tourist traffic in 2014.

In regards to tourism’s contribution to employment this year, some 120,000 new jobs were created in the first seven months of the year compared to 2013. 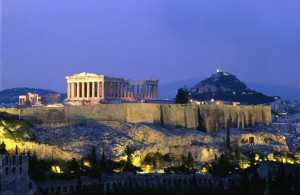 When referring to the Greek capital, Mrs. Kefalogianni said that following “a dark period of depreciation, insecurity and uncertainty,” Athens remains a city that looks towards the future with optimism.

“Athens may very soon become the capital of Greek tourism again,” the tourism minister said and referred to recent data released by the city’s hotel association.

During the January-August 2014 period and compared with last year, Athens recorded a 22.3 percent increase in hotel occupancy, a 28.3 percent rise in revenue per available room and a 29 percent increase in international arrivals. The increased figures were said to have helped generate more revenue of 142.8 million euros to the city’s economy.