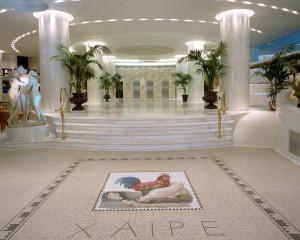 Greece’s city hoteliers have a very positive outlook for the performance of their units in the third quarter of 2014 on all levels, while resort hotels are slightly more cautious in their predictions, according to the latest tourism barometer report by GBR Consulting on the expectations of the Greek hospitality sector.

According to the report, overall the Greek hotel sector is very optimistic for the coming third quarter of 2014. Significant increases are forecast compared to the same period last year for both occupancy and room rates.

The city hoteliers appear to be the most optimistic as almost nine out of 10 expect occupancy levels to improve with two percent or more for both their hotel units and the market as a whole. With respect to room rates about eight out of 10 hoteliers expect similar performance.

However, approximately four out of 10 resort hoteliers expect stabilizing occupancy levels and average room rates (ARRs) or even decreases.

The analysis per hotel category of this quarter’s barometer survey shows that the 3-star hotels are among the most optimistic of this quarters’ survey. In terms of occupancy, none of the hoteliers are expecting decreases and for rooms rates, only six percent expects mild decreases of two to five percent as far as their own hotels are concerned.

The 4- and 5-star hoteliers are also very positive expecting strong improvements in occupancy and room rates this quarter.

On the other hand, the 2-star hoteliers show a mixed picture. While they are very optimistic to improve their occupancy rates with at least two percent, they expect overall stabilizing room rates. For both the market as a whole and their own hotels around 50 percent expects increases while the other 50 percent expects stabilizing ARRs or decreases.

25% Of Hotel Bookings In Europe Are Made Via Internet Intermediaries