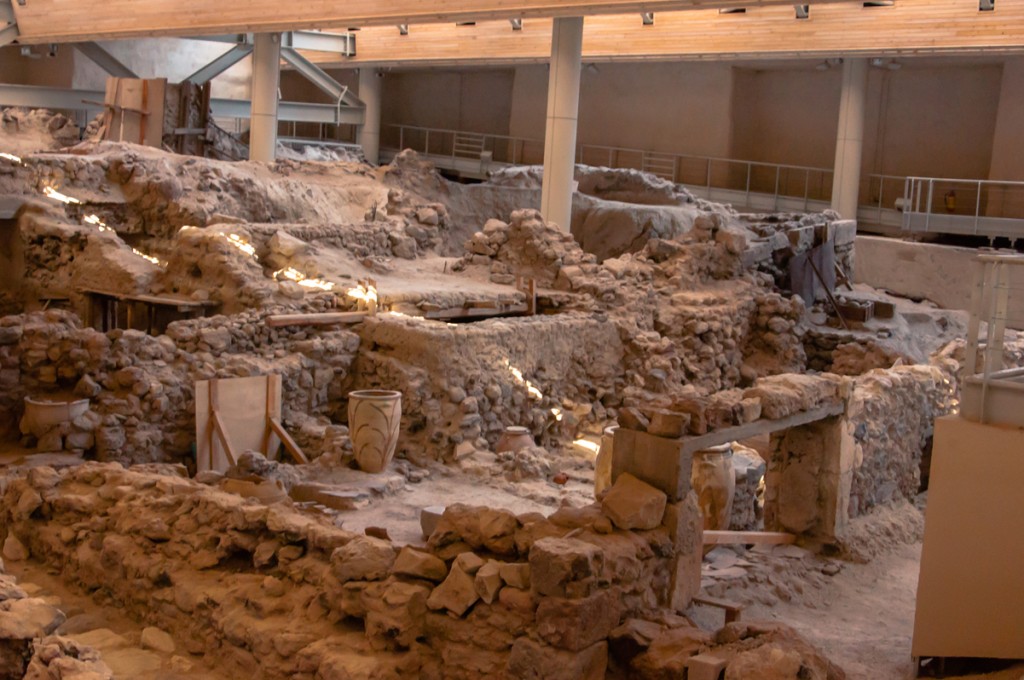 It is one of the most important prehistoric settlements of the Aegean. The first habitation at Akrotiri dates from the Late Neolithic times (at least the 4th millenium BC). During the Early Cycladic period (3rd millenium BC), a sizeable settlement was founded, and in the Middle Cycladic period (ca. 20th-17th centuries BC) it was extended and gradually developed into one of the main urban centres and ports of the Aegean. The large extent of the settlement (ca. 20 hectares), the elaborate drainage system, the sophisticated multi-storeyed buildings with the magnificent wall-paintings, furniture and vessels, show its great development and prosperity. The various imported objects found in the buildings indicate the wide network of its external relations. Akrotiri was in contact with the Minoan Crete but also communicated with the Greek Mainland, the Dodecanese, Cyprus, Syria and Egypt. The town’s life came to an abrupt end in the last quarter of the 17th century BC when the inhabitants were obliged to abandon it as a result of severe earthquakes. The erruption followed. The entire island and with it the prehistoric town of Akrotiri were buried unter the volcanic materials which covered the buildings and their contents, like a protective shield, as in the case of the Roman Pompei.

Evidence of habitation at Akrotiri first came to light in the second half of the 19th century. The systematic excavations began in 1967, by Professor Spyridon Marinatos under the auspices of the Archaeological Society at Athens. He decided to excavate at Akrotiri in the hope of verifying an old theory of his, published in the 1930’s, that the eruption of the Thera volcano was responsible for the collapse of the Minoan civilization. Since his death in 1974, the excavations have been continued under the direction of Professor Christos Doumas. No interventions are made on the uncovered monuments unless it is necessary for their consolidation or for the preservation of the evidence, including information concerning the destruction of the settlement.