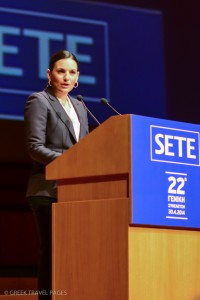 Tourism Minister Olga Kefalogianni is pleased for all that has been achieved in the field of Greece’s tourism and very optimistic for this year, according to her speech during the 22nd annual general assembly of the Association of Greek Tourism Enterprises (SETE) that took place 30 April in Athens.

“In 2013, arrivals in our country exceeded 20 million visitors (including cruise passengers) while revenues increased by some 15 percent,” the Greek tourism minister said.

Mrs. Kefalogianni cited recent data, according to which, tourism revenue increased 17.3 percent during the January-February 2014 period, compared with the corresponding period last year, while arrivals in the first quarter of 2014 showed an increase of over 23 percent.

The tourism minister underlined that “this is not a random coincidence,” but the result of targeted reforms that highlight “a Greece that wins battles.”

Earlier in the day, during SETE’s closed meeting, Mrs. Kefalogianni referred to the actions the Greek Tourism Ministry will follow for the current period.

Specifically, a tourism bill will soon be tabled, which among other things, includes measures for the efficient operation of tourist ports and ski resorts. The bill will also provide the institutional framework for agritourism and wine tourism and combat seasonality.

Mrs. Kefalogianni added that the tourism ministry’s special investment service is currently reviewing 11 proposals for major development projects in areas throughout Greece such as Milos, Ios and Kea. 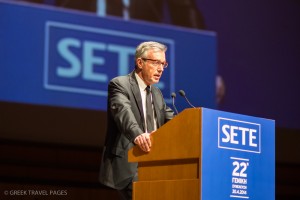 On his part, SETE’s president, Andreas Andreadis, referred to the aim of Greek tourism, which is to constitute 20 percent of the country’s GDP directly and indirectly and generate thousands of new jobs every year.

SETE has a growth-oriented strategic plan for tourism that sees Greece welcoming 24 million international arrivals and collecting 18-19 billion euros in revenue on an annual basis by 2021.

For 2014, SETE expects international arrivals to surpass 18.5 million and Greece to collect some 13 billion euros in revenue.

Mr. Andreadis said that in the next three years, more should be expected from SETE that will work very close with Marketing Greece and InSETE to boost the country’s tourism image.