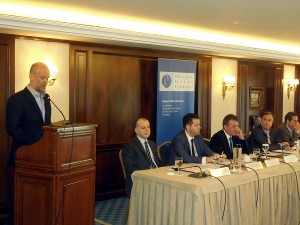 The president of the Hellenic Federation of Hoteliers, Yiannis Retsos, said a record of tourist arrivals in Greece from almost all major markets and a corresponding increase in revenue should be expected for 2014.

Speaking at the federation’s recent annual general assembly in Athens, Mr. Retsos said the expectations are in accordance to initial messages the Greek tourism industry is receiving for the 2014 season.

During his speech, the federation’s president referred to satisfactory developments and successful legislative interventions made for Greek tourism.

However, he underlined that liquidity must be restored and that debt obligations of hotel enterprises to banks need to be restructured.

While referring to a list of issues that are pending solution, Mr. Retsos mentioned the necessity of new visa policies (multiple entry visa, electronic visa, etc.) for non-Schengen tourists interested in visiting Greece. He also called for a solution for the simple use of foreshore areas by entrepreneurs.

Mr. Retsos referred to the federation’s proposal for the establishment of an annual four-day school break period, a “Ski Week” (or “White Week”), aimed to boost domestic tourism. The proposal was discussed earlier this year by the Greek Government but has been put on hold for the time being.

During the general assembly, the federation’s members were informed by Greek Labor Minister Yiannis Vroutsis that a new minimum wage will be introduced in Greece in mid 2016.