EY Report: Hotel Sector Is Focused On Growth In 2014

A strong performance is predicted for the global lodging industry in 2014 with investors seeking out new opportunities in the worldwide hospitality sector, according to a recent Ernst & Young (EY) report. EY is a global leader in assurance, tax, transaction and advisory services.

Following years of a slow and stubborn recovery and constrained capital budgets, the global hospitality sector witnessed a strong appetite for growth in 2013. “This is a trend that is set to continue and pick up pace in 2014,” EY said in its “Global Hospitality Insights Top Thoughts for 2014” report.

Global Hospitality Insights follows 13 key trends expected to have major impacts on the hotel sector in 2014 and anticipates strengthening fundamentals providing a basis for solid financial performance in 2014. Most importantly, hotel companies are finding greater access to a variety of debt and equity capital sources across both public and private platforms, making further expansion possible.

“This year will be a landmark year for the hotel sector in Greece as official forecasts (of the Greek Tourism Ministry, SETE etc.) predict a significant increase in visitors to our country, reaching 18 million tourists,” said the CEO of EY Greece, Panagiotis Papazoglou.

Mr. Papazoglou said the increased rate of arrivals will contribute significantly to the revenue growth of Greek hotels, which had suffered significant financial losses in recent years. As a result, well-known units, both in the center of Athens and the regions, suspended their operations as a result of the economic crisis. 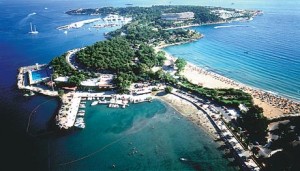 “From 2013, slowly but steadily, Greece’s hospitality industry is recovering and an increased investor interest is apparent,” Mr. Papazoglou said. As examples, he mentioned the privatization scheme of Astir Palace by a consortium of Greek and foreign entrepreneurs and also the privatizations of several “Xenia” motels across the country.

“The business climate in tourism must be strengthened and enhanced through a new and flexible investment framework to attract business and through the expansion of Greece’s tourism season,” he added.

According to the EY report, with little new hotel development and few transactions in the last five years, investors globally have amassed an appetite – and capital – for new deals, leading to an increase in capital markets activity and heightened cross-border capital flows.

Seeking high-quality investments in stable markets, Asian investors dominated global hotel transactions in 2013 and look set to repeat their high level of activity in 2014. Chinese and Singaporean investors combined are forecasted to account for over 60 percent of the total capital invested in hospitality outside Asia.

Among global investment opportunities, development is attracting attention with developers focused on serving current and projected customer demand in areas such as select service hotels, all inclusive-resorts and “alternative” lodging products, such as hostels.

And, while development activity is rising in many markets around the world, particularly gateway cities, developers operating in Asia and sub-Saharan Africa are among the primary beneficiaries of increased access to debt and equity capital.

In sub-Saharan Africa, Ghana, Nigeria and coastal Tanzania, in addition to South Africa, all are witnessing significant hotel development.

“Yet, while hotel investors and operators are growing in confidence, long-standing risks – particularly in respect of widespread energy and transportation infrastructure problems – continue to temper their perspective of the region,” EY noted in the report.

Report: Tourism Is An Opportunity To Go After In Greece