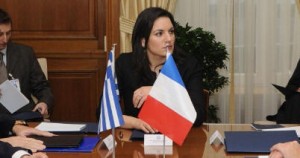 Greek Tourism Minister Olga Kefalogianni will depart for Paris, France, on Monday 24 March to promote Greece and strengthen tourist arrivals to the country that are already posting robust growth since the beginning of 2014.

During her official visit, Mrs. Kefalogianni will meet with Christian Mantei, the Director-General of the French Tourism and Development Agency Atout France.

She will then participate in a workshop with members of the French agency to exchange expertise on issues relating to the organization and operation of Atout France and the Greek National Tourism Organization. This falls under the cooperation agreement signed last year between the tourism ministries of the two countries.

The Greek tourism minister will also meet with the Director-General of UNESCO Irina Bokova and attend an event organized by the Greek Embassy in Paris to celebrate 25 March (Independence Day in Greece).

In addition, while in Paris, Mrs. Kefalogianni will give interviews to print and electronic media and also to magazines that deal with specific forms of tourism.