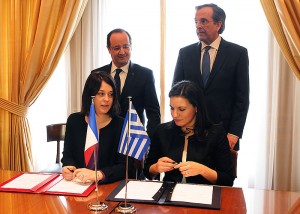 A stronger tourism cooperation between Greece and France is now official, according to an agreement signed recently in Athens between Greek Tourism Minister Olga Kefalogianni and French Minister for Trade, Commerce and Tourism Sylvia Pinel.

According to the Tourism Ministry, Greece and France have agreed to facilitate travel between the two countries and to encourage cooperation between travel agency associations and tourism related businesses and organizations.

Moreover, both sides will exchange information and advertisements to enhance public awareness in Greece and France on each country’s tourist attractions through the participation in exhibitions and conferences and the organization of fam trips for travel agents and journalists.

Mrs. Kefalogianni and Ms. Pinel agreed to inform each other on incentives for tourism ventures provided by national legislation to encourage investment in both countries by Greek and French entrepreneurs.

A stronger cooperation between the Greek National Tourism Organization and the France Tourism Development Agency “Atout France” was also agreed.

In regards to thematic forms of tourism, Greece and France agreed to transfer know-how and best practices in areas of common interest with special emphasis on the development of cultural, rural and spa tourism by promoting the roads of wine, gastronomy and spa and wellness centers of both countries.

The two ministers also said they would cooperate for the development of intra-European tourism in the context of the European Union’s actions in both countries, such as the Calypso initiative*

Both sides agreed to hold meetings on a regular basis to achieve the above-mentioned goals. According to the ministry, tourism professionals from both the public and private sector may be called to attend the meetings.